Spin electronics is an emerging science which aims at using the spin of the conduction electrons in electronic devices. In a near future, the fundamental mechanisms of spin transport will be affected by some physical limits linked to a further size reduction towards the nanometer scale. It is thus fundamental to understand these limits and more generally the physics of magnetism and transport in reduced dimensions.

Metal-metal nanocontacts are crucial in many areas, but have been poorly investigated from the point of view of local magnetism. This is a very appealing research domain, since local magnetism will greatly influence the (ballistic) conductance across a nanocontact. The break junction technique is a tool that allows the creation of stable (several hours) atomic contacts, which consists in breaking a material in a controlled manner by bending it until eventually a single atom contact appears between the two surfaces. Once a stable configuration is obtained the resistance can be measured as a function of an applied magnetic field. Michel Viret (CEA, SPEC) showed that in magnetic materials such as Fe, Co or Ni, one can obtain large magneto-resistive effects [1].

We have undertaken a theoretical study of such systems. This problem can be tackled in three steps: i) Simulation of the breaking process ii) Determination of the electronic and magnetic structure of the break junction iii) Calculation of the ballistic electronic transmission. Step i) is performed by the use of standard molecular dynamics techniques with a newly developed empirical potential for iron. The simulation starts from an atomic arrangement made of two slabs connected by a bridge presenting a constriction in the middle. The two slabs are then stretched apart at a constant speed while the atoms of the constriction are allowed to rearrange according to Newton's law of motion. The deformation involves a series of elastic stretchings terminated by a bond-breaking. The first simulations seem to confirm the fact that contrary to gold and platinum no atomic chain is formed. For step ii) we have developed a tight-binding approximation including s, p, and d valence atomic orbitals taking into account non-collinear spin polarisation in the presence of spin-orbit coupling. Magnetism is treated either by a Stoner-like model [2] or by the use of a more elaborated Hartree Fock Hamiltonian which naturally includes orbital polarization effects [3]

We have shown that the spin-orbit interaction is responsible for the anisotropy of the band structure in monatomic wires which could explain in part the magneto-resistive effects observed experimentally. Furthermore this anisotropy is strongly enhanced in low dimensional systems when the full Hartree Fock Hamiltonian is used (Fig.1) . Therefore we expect that this model is necessary to quantitatively reproduce the experimental findings. 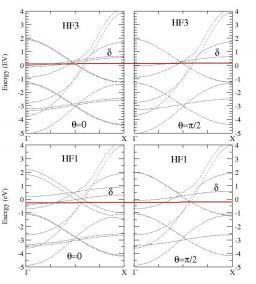 Bandstructure of a monatomic Fe wire with a magnetization parallel (θ=0) or perpendicular (θ=π/2) to the wire calculated with the Full Hartree-Fock (HF1) and, Stoner-like (HF3) modes.. The zero of energy corresponds to the Fermi level. Note the splitting of the d band at the Fermi level which is much more important with HFl than with HF3 model when θ=0. 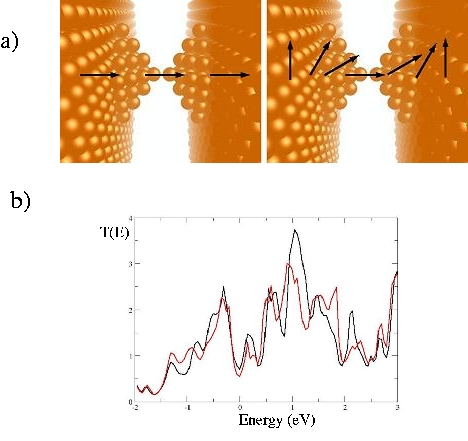 Ballistic transmission coefficient T(E) (b) in the zero bias limit of a model iron break junction where the two electrodes are modelled by two (001) surfaces and the constriction by two square base pyramids touching at their summit (a). The black curve corresponds to the collinear magnetic configuration (left a), while the red curve corresponds to the non-collinear configuration (right a).

Finally for step iii) we have set up a program calculating  the Landauer ballistic conductance in the “zero bias” regime using a standard Green function formalism in the localized tight-binding basis set. We have first carried out a series of calculations for model systems such as monatomic wires presenting geometric (stretched bonds) and magnetic (domain wall) defects with non-collinear configurations. We have also calculated more realistic junctions and shown that the spin-orbit interaction cannot be the only origin of the observed anisotropic magnetoresistance. However non-collinear configurations in the constriction region due to possibly large magnetic anisotropy can give rise to noticeable magneto-resistive effects of several percents (Fig. 2). We are presently working on a simulation of the complete scenario of the breaking mechanism where transport is calculated at various steps of the breaking process. We also plan to extend our work to other systems such as Platinum presenting a large spin-orbit interaction and which is known to lead to the formation of wires that could be magnetic, according to recent ab-initio calculations [4]