The coupling of magnetic, electric and mechanical properties within a unique material is a most looked after characteristic that only very few compounds possess. These so-called ‘multiferroics’ have seen a recent surge of interest as magneto-electric (ME) effects, i.e. the coupling between electrical polarization and magnetism, has a great potential for making memories applied in future information technologies. This property is indeed of great interest in order to write magnetic memories (used e.g. in Magnetic Random Access Memories, MRAMs), efficiently and without significant heat production. The search for an ideal material has revived the investigation of known compounds, of which BiFeO3 stands out as the most important example as it is still the only one with ferroelectricity and antiferromagnetism coexisting at room temperature. Although it has been known for a long time, it remains a subject of intensive investigations aiming to improve and understand its properties in bulk and thin film forms.

In our group, we have chosen to study BiFeO3 in detail. Our work started in 2006 with the success in growing, in our laboratory, exceptional quality single crystals [1] which are magnetically and electrically single domain. This allowed us to measure its intrinsic polarisation at room temperature in excess of 100 mC/cm2 [1], a record among all ferroelectrics. Using neutron scattering on similar crystals, we evidenced for the first time in bulk BiFeO3 a strong coupling between magnetic and ferroelectric orders [2] (figure). We then demonstrated the magnetic exchange between the antiferromagnetic lattice of BiFeO3 crystals and a soft ferromagnetic layer deposited on top, which could also be manipulated with the polarisation state of the multiferroic to demonstrate an electric control of the magnetic anisotropy [3, 4]. In 2010, we also discovered that BiFeO3 is photostrictive, i.e. it changes size when illuminated by visible light [4]. This is a very interesting property which can be used to couple photons to phonons or realize new types of memories [5] using remnant photostrictive states. Moreover, due to its not too high bandgap, BiFeO3 is also a photovoltaic material in which photovoltages and photoconductance can be controlled by an electric field [6]. Despite the reduced PV efficiency, this last property is potentially interesting, as is the exact (still unclear) role played by its ferroelectric domain walls. We designed and carried out an original experiment allowing to image photovoltages around a unique domain wall in a single crystal [7] evidencing the importance of internal fields. 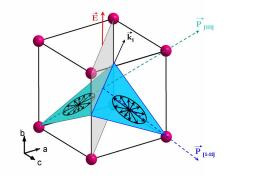 Among the ordered electronic states occurring in materials, magnetism is uniquely robust and ferromagnets have proven very important in everyday life. They also compose the elemental bricks of ‘spintronics’, the new branch of electronics using the electron spin in devices for information technology. Despite their success, these materials have fundamental physical limitations, which might be circumvented by using antiferromagnets (AF), compounds with counter-aligned neighbouring magnetic moments. These have several key potential advantages including insensitivity to external perturbations like electromagnetic fields and a reduced mutual interaction with their neighbouring domains, which could lead to the production of denser memories in the near future. In our group, we have chosen to study insulating antiferromagnets because of their superior dynamical properties. Indeed, antiferromagnets have intrinsic dynamics in the THz range thus providing the fantastic opportunity to multiply by a hundred the speed of operating magnetic devices. However, this potential revolution comes at some price, as it is very hard to control antiferromagnetic orders.

In the last years, we have worked on the two fronts of spin conduction in insulators and antiferromagnetic imaging. The former started a few years ago with our first demonstration that insulating antiferromagnets are spin conductors [8]. This is an important conceptual discovery as we realized that a spin current can flow without conduction electrons. We proposed that the conducting entities are spin excitations in the form of intrinsically spin charged antiferromagnetic waves, or antiferromagnons. Several theories have appeared since this result but this point is still not yet settled.

We also addressed very recently another important issue related to imaging AF textures. This is a much harder task than for ferromagnets (because of the absence of stray fields) and we have developed a non-linear optics technique based on imaging the second harmonic light generated by magnetic orders. The experiment based on femtosecond light pulses has state of the art submicron resolution and it allowed us to follow the evolution of AF domains under the application of some external fields [9]. This provides an essential tool for pursuing investigations on how to best control AF domains and eventually to trigger and use antiferromagnetic spin waves in THz spintronic devices. In parallel, we have been able to image the uncompensated moments from the non-collinear cycloidal antiferromagnetic structures in BiFeO3 in a collaboration with the UMR CNRS/Thales and the university of Montpellier [10]. This demonstrates that NV center magnetometry is suitable for imaging domain walls in pure collinear antiferromagnets.

Spintronics relies on the discrimination of spin up and down carriers originally generated by charge currents in metallic ferromagnets. Recent developments aim to get rid of this source of dissipation by manipulating pure spin currents without the charge counterpart. One convenient way of producing pure spincurrents is to use the spin-orbit coupling (SOC) interaction in a non-magnetic heavy metal like Pt. The interaction, called Spin Hall Effect (SHE), relies on a directional scattering of electrons of different spins by SOC resulting in the generation of a spin current transverse to a charge current. As signals should eventually be read as voltages, the reverse effect, called inverse Spin Hall effect, converts a spin current into a transverse charge current. Another SOC effect based on the Rashba interaction is even more efficient. The effect stems from the joint action of the SOC and built-in electric potentials in two-dimensional electron gases existing at surfaces, interfaces or semiconductor quantum wells. We have measured this so-called Inverse (Rashba) Edelstein Effect (IEE) in the Ag/Bi interface [11], where the Rasha splitting is particularly strong. In the experiments, spin currents are generated by spin pumping using ferromagnetic resonance (FMR) in an adjacent ferromagnet (figure). We have also demonstrated that other systems like the 2D electron liquid appearing at the interface between two insulators as in the LaAlO3/SrTiO3 are also excellent candidates [12]. Some properties linked to this particular system are still not understood. In particular, we have shown that there is an in-plane dependence of the effect that probably reflects the non-isotropic Fermi surface inducing either an angular dependence of the Rashba field or a direction dependent scattering time. This could be linked to the symmetry of the relevant in-plane d-orbitals, but this is not yet clear. Moreover, time-resolved measurements would be highly desirable in order to elucidate carrier lifetime effects, but this is a hard task as present measurements rely on spin pumping by ferromagnetic resonance, a technique intrinsically limited to the nanosecond range.

Figure: Spin injection by ferromagnetic resonance (spin pumping) from NiFe into the electron liquid at the LAO/STO interface

In the last few years, we have studied the interaction between magnetisation dynamics and electrical transport in magnetic nanostructures and atomic contacts. We have achieved atomic sized resolution in the detection of ferromagnetic resonance using a novel experimental setup in which a mechanical break junction experiment is set up in a radio-frequency compatible environment where electrical measurements can be carried out under variable static and dynamical magnetic fields. The resonance properties of magnetic nanostructures were first measured in order to determine the reliability and the high sensitivity of our system. Then the susceptibility of domain walls in nanostuctures at frequencies higher than those classically used for their motion, was measured and found to be large and almost independent of the frequency [13]. This susceptibility was roughly 10 times that obtained in saturated domains. The experimental setup also allowed the study of the interaction between spin currents and the magnetization dynamics of nanostructures at the ferromagnetic resonance. The spin currents dynamically generated at the FMR have been measured in Py/Pt nanostructures using the inverse spin Hall effect in platinum [14]. The influence on the FMR of spin current injection using the spin Hall effect in Pt has also been observed.

The FMR of atomic contacts has also been studied. While breaking our nanostructures of cobalt and permalloy, new resonant modes have been shown to appear at fields higher than that of the uniform resonance. This is attributed to the effect of demagnetization fields that are locally modified when reducing the constriction diameter. In the atomic contact regime, we have measured the constrained domain wall resonance. In that case the rectified signal, generated by a few atoms, can reach values 1000 times larger than those generated by the FMR of saturated domains, before controllably breaking the constrictions [15]. 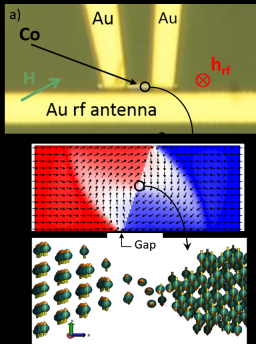 Figure: Co break junction with RF antena. A domain wall is positioned on the atomic contact and a DC voltage appears across the contact at the resonance frequency.

· 1988-89: Scientific attaché of the French embassy in Ireland as part of my ‘National Service’ duties.

Publications within the HAL-CEA basis.

Lecturer in M2 (Masters level): 'magnetism and spin electronics' in 'Materials for Energy' of the INSTN master course.

Supervisor of the following PhD works: