The dynamics of the liquid phases, however, qualitatively resembles to the one of a boiling liquid: mesoscopic vapor bubbles are continuously created in the bulk, coarsen, and are ejected into the exterior vapor (bubbly phase separation). Puzzlingly, this observation is almost dual to the experimental findings on synthetic self-propelled particles, which can instead form dense living clusters. In these experiments, self-propelled colloids indeed aggregate but the clusters show highly dynamic particle exchange and saturate at a mesoscopic scale.

In [1], it was shown that the observed occurrence of cluster phases and of bubbly phase separation does not require system-specific explanations, but should be expected generically in active systems.

These results are achieved by studying the most generic field theory (or noisy continuous description) that generalizes Model B, the standard model for equilibrium liquid-gas phase separation, to include all those terms that break time-reversal symmetry at leading order. Remarkably it was shown that cluster phases and bubbly phase separation are dual to each other, and both caused by the same mechanism: Ostwald Ripening, which dynamically drives bulk phase separation to completion in equilibrium fluids, can be reversed by activity when this is strong enough. In the Figure, we report results from numerical simulations of our continuous description both in the microphase separated state and in the bubbly phase separation regime.

By understanding the origin of microphase separation in active systems, and providing both the minimal continuous description and particle model that show such phenomenology, the work might trigger computational and experimental studies to investigate this new phase of matter and control it in the future. 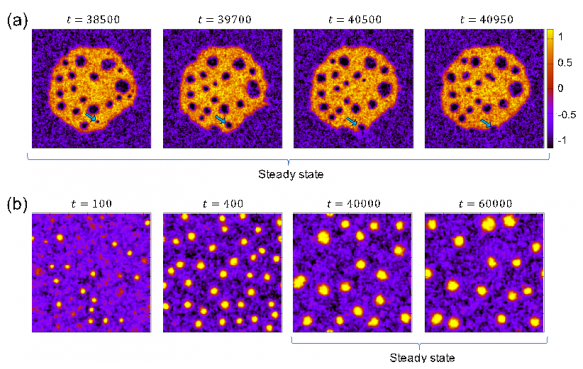 Time-series obtained from numerical simulations of the continuum description of active fluids studied in [1]. Colours represent density of active particles (yellow is the liquid, violet the gas). (a) Bubbly phase separation: the macroscopic liquid droplet supports a population of vapor bubbles, created by nucleation at its interior and destroyed by ejection. (b) Microphase separation: finite-size liquid clusters coexist in steady state. These are the two states of matter that are shown in [1] to occur generically in active colloidal fluids, irrespectively of system details such as long-range interactions mediated by hydrodynamics.