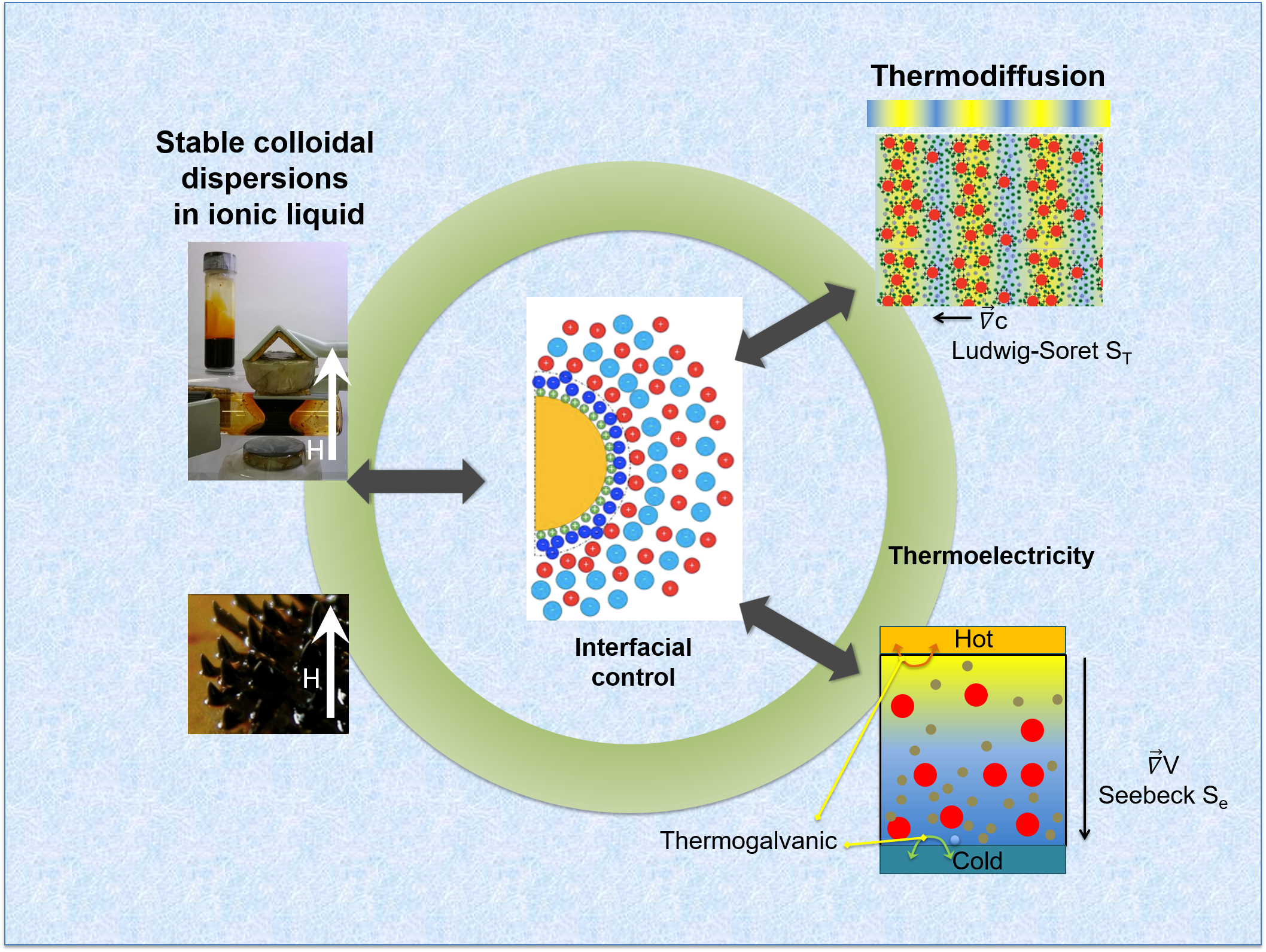 Fig.1: Cover image adapted from Ref [1]. Left: The images of concentrated ferrofluid responding to external magnetic field (top: fluid placed between two permanent magnets; bottom: fluid placed on a permanent magnet showing a typical ‘Rosensweig peak-instability’). Middle: the schematic representation of nanoparticle-ionic liquid interface structure with alternating positively/negatively charged ion layers. Right: thermo-electrically induced physical phenomena reported in the article; thermodiffusion (top, observed via Forced Rayleigh Scattering spectroscopy) and thermoelectricity (bottom, measured using ‘thermocell’ (see text)). The concentration gradient (∇c) of charged magnetic nanoparticles induced by a temperature gradient (here, alternating temperature grating experiment is shown) is closely related to the internal thermoelectric field ∇V= -E. The former is expressed in terms of Ludwig-Soret coefficient ST = - ∇c/∇T and the latter in terms of the Seebeck coefficient Se= - ΔV/ΔT. The Seebeck coefficient stems from both thermogalvanic reactions of redox species and the thermodiffusion of charged nanoparticles. These two quantities are correlated to one another through key physical parameters such as the effective charge, the diffusion coefficient and the Eastman entropy of transfer (see text).

Ferrofluids are a class of colloidal suspensions made of magnetic nanoparticles dispersed in non-magnetic media. Owing to the superparamagnetic nature of individual particles and the magnetic interactions among them, ferrofluids exhibit unique and reversible properties under an external magnetic field, making them an attractive smart material for rheological, thermal, photonic and more recently, for thermoelectro-chemical energy conversion applications. To enable such energy conversion, a ferrofluid is mixed with redox-active salts (called ‘redox couple’ made with transition metal ions in oxidized and reduced state) and placed between conducting electrodes in a device known as ‘thermocell.’  When a temperature gradient is applied, two thermoelectric phenomena take place and generate a voltage bias ΔV between the electrodes : the thermogalvanic and the thermo(electro)diffusion effects (see Fig.1, Bottom-right) [2]. The former relies on the temperature dependent redox reactions between the redox-species (here, I- and I3-) and the electrodes while the latter is due to the thermodiffusion of charged particles and ions, similar to the Seebeck effect in solid materials. Though both effects contribute to the overall thermocell voltage bias ΔV, it has become customary to introduce Se= -ΔV/ΔT as the total Seebeck coefficient of a thermocell.

The intensity of thermodiffusion is expressed in terms of Ludwig-Soret coefficient, ST = - ∇c/∇T (see Fig.1, Top-right), where ∇c is the concentration gradient induced by a temperature gradient ∇T. For electrically neutral particles, ST is proportional to the Eastman entropy of transfer Ŝ, which is the interaction entropy between the moving particle and its surrounding molecules. In the case of electrically charged particles, an additional (thermo)electric force interferes with the particle diffusion either constructively or destructively, depending on the relative sign of the electric field and the sign of the particles’ surface charge (Zeff). The relationship between the Ludwig-Soret coefficient and the Seebeck coefficient can be determined using the Onsager reciprocal relations for heat and mass flows; and are shown to depend on three common parameters: the diffusion coefficient (Dm), the effective charge (Zeff) and the Eastman entropy of transfer (Ŝ). Such analytical description has been used successfully to reproduce the experimental observations on the thermoelectro-diffusion of charged colloidal suspensions in weak electrolytes (e.g., DNA molecules or nanoparticles dispersed in water, organic solvents, etc.) [4-6]; however, its validity is yet to be tested in strong electrolytes, for example, in room temperature ionic liquids.

Room temperature ionic liquids (RTILs) are molten salts with low melting temperature (below 100 °C). They have unique thermophysical and electrochemical properties such as reduced flammability, low vapor tension and high thermal stability. By dispersing therein magnetic nanoparticle, their bespoke application potential can be broadened to extreme environments, e.g., in electrospray thrusters for rockets or in high-vacuum seals for microelectronic device fabrications. However, the large ion concentrations in ionic liquids renders classical theories such as the Poisson–Boltzmann equation describing the formation of Debye layer at the solid-liquid interface invalid. Furthermore, the synthesis techniques developed for colloidal dispersions in weak electrolytes are revealed ineffective in RTILs. Consequently, the synthesis of ionic-liquid based colloidal dispersions (not limited to ferrofluids) was quickly recognized as a formidable challenge to both fundamental science and engineering.

Published in ChemEngineering (cover story [1]) in March 2020, K. Bhattacharya et al. (SPEC/SPHYNX, CNRS-Sorbonne University/PHENIX and LLB/MMB) report a systematic study on the synthesis, colloidal structure and the thermodiffusion/thermoelectric properties of an RTIL-based ferrofluid (made of citrate-coated maghemite nanoparticles dispersed in ethylammonium nitrate  with Na+ counterions) for a wide range of nanoparticle volume fraction Φ. The colloidal structure was investigated using the Small Angle X-ray Scattering (SWING@SOLEIL) technique, while the solid-liquid interfacial structure; i.e., the charge composition at the nanoparticle surface, was studied via chemical titration. The organization of ethylammonium, nitrate and sodium ions close to the (originally) negatively charged particle surface was found to form layers of ions with alternating signs. This layering is believed to be at the origin of the colloidal stability in ionic liquids, dictating both the nanostructure of the dispersions and the interparticle interactions.

In parallel, the thermodiffusion coefficients (Soret coefficient ST and diffusion coefficient Dm) were measured by forced Rayleigh scattering experiments (CNRS-Sorbonne University/PHENIX, [7]) as a function of temperature and the nanoparticle concentration. The results were then compared to the Seebeck coefficient (Se) measured in a homemade thermocell developed at SPEC/SPHYNX. Finally, by comparing the experimental data to a theoretical model (taking in account the contributions from additional mobile ions in the RTIL), it was possible to estimate the effective charge Zeff of the nanoparticles and the Eastman entropy of transfer Ŝ.

As can be seen from Fig.2, the two independent measurements (ST and Se) lead to common values of Zeff and Ŝ i.e., Zeff = +55 and  Ŝ/kT=6.0 K-1. It is interesting to note that the sign of the effective charge of the magnetic nanoparticles (inferred from the thermoelectric measurements) is positive, reversed from the initial condition in water. This results from the adsorption of EA+ cations in the first ionic layer surrounding the citrate-coated nanoparticles together with some Na+ cations, remaining from the initial step of the synthesis.

The quantitative match between the two measurements demonstrates the robustness of the present theoretical approach beyond weak electrolytes. Simultaneously, the findings also suggest that with a proper tuning of nanoparticle effective charge (the sign and the magnitude) and the Eastman entropy of transfer, one can hope to concoct ionic-liquid based ferrofluids where the inclusion of nanoparticles can effectively enhance the Seebeck coefficient.