The Stardust mission, which ended in success on January 15, 2006 after a tour lasting seven years in space, brought back to the Earth the first samples of material taken from the dust coma of comet Wild-2. This comet formed in the Kuiper Belt 4.5 Ga ago. Its orbit far from the Sun helped limit its alteration during its journey and consquently its composition must have been substantially unaltered since its birth. The samples, accordingly, could hold precious clues to the conditions of comet formation. One of the questions that laboratories try to answer concerns the precise concentrations of light elements such as carbon and nitrogen. The results are important in solar system astrophysics, where one seeks to know the redox conditions that prevailed at the time of formation of the first solid materials, as well as in exobiology, for the estimation of the extraterrestrial sources of organic molecules.

The physical nature of the samples collected (grains with dimensions of microns) and the desired type of analysis (concentrations of light elements) have been carried out at the Laboratoire Pierre Süe (LPS) in association with the "Preliminary Examination Team (PET)", a group of laboratories charged with making the first investigations of the samples upon the return of the mission.

Analytical techniques based on ion beams developed at the nuclear microprobe of LPS permit the determination of concentrations of light elements such as those sought with adequate sensitivity, and, moreover, features of the nuclear microprobe allow one to overcome problems of inhomogenity and geometry inherent in this type of sample. In fact, the LPS has already been brought to bear on samples of extraterrestrial origin, in particular on fragments of meteorites or micrometeorites [1]. 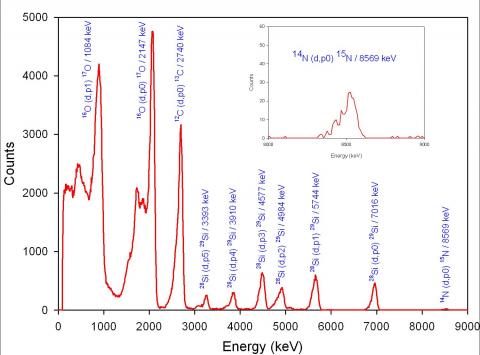 Preliminary experiments were carried out at the microprobe at the end of 2005 on samples of a nature and form similar to those expected for Stardust particles. This work allowed us to define the optimal conditions for the experiments and to estimate the times required for analysis [2]. The data reduction tools were also optimised at this time.

In the month of May, 2006, we proceded to make the first measurements on 3 samples from the mission. These objects, in which the largest homogeneous structure did not exceed 5 µm, were extracted from aerogel in which they had been trapped since the encounter of the probe with the wake of the comet. Aerogel is a silicate of extremely low density (d ~ 2 mg/cm3) in which the particles were progressively slowed so as to limit the risks of disintegration and/or elemental fractionation. The technique used (analysis by nuclear reaction or NRA) rests on spectrometric measurements of the products of nuclear reactions induced by a microbeam of deuterons. The measurements took about 100 hours, during which there were no major fluctuations in the stability of the beam shape or current. The samples analysed, pressed into a thin foil of indium (which is a ‘transparent’ substrate for the purposes of this and related measurements made on the same particles) revealed the presence of carbon and nitrogen in quantifiable amounts with good precision. The analyses place the samples in the family of silicates.

The ensemble of analytical results (the work-up of the elemental and isotopic spectroscopic data ...) is being synthesized by the Preliminary Examination Team prior to the distribution of all particles captured in the aerogel to the international community. Several publications in "Science" result [3,4].

Note: Online research of the microsample captured in aerogel by visual analysis of images, is available for the general public: the project can be found at .