The principle of using nanoscale memory devices as artificial synapses in neuromorphic circuits is recognized as a promising way to build new circuit architectures tolerant to defects and variability. Yet, actual experimental demonstrations of neural network type of circuits based on non-conventional/non-CMOS memory devices and displaying function learning capabilities remain very scarce. We recently showed that carbon-nanotube based memory elements can be used as artificial synapses, combined with conventional neurons and trained to perform functions through the application of a supervised learning algorithm [1].

This work is based on photosensitive carbon nanotube transistors called OG-CNTFETs (optically gated carbon nanotube FETs) that we studied in details both as photo-detectors and as memory devices [2,3]. We showed that such devices can be used as a resistive memory elements [4] and proposed ways to implement them to store synaptic weights in neural network circuits [5,6]. The propose implementation is ideally suited for the parallel learning of multiple functions in a crossbar array of OG-CNTFETs as shown by simulations [5,6].

At the experimental level, using non-scaled down devices, we also showed that the same ensemble of 8 devices can be trained multiple times to code successively any 3-input linearly separable Boolean logic function despite device-to-device variability. This work represents one of the very few demonstrations of actual function learning with synapses based on nano-scale building blocks. [1] The potential of such approach for the parallel learning of multiple and more complex functions will be discussed. Finally we explore the scalability of such strategy by evaluating programming speed [7] and size issues [8] in single-nanotube based devices. 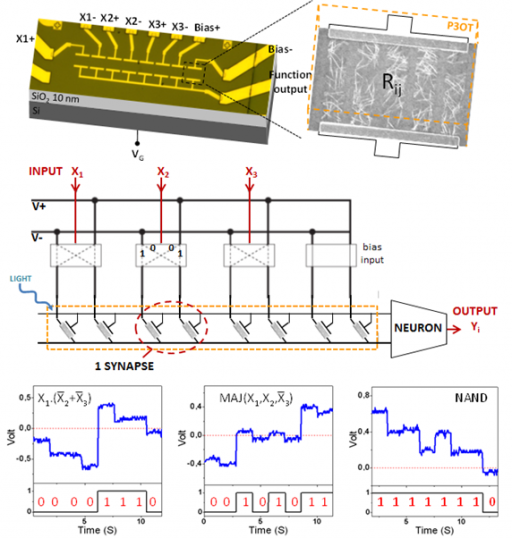 Fig. 1 (top) optical microscope image of a line of OG-CNTFETs based on carbon nanotube networks and SEM image of one device. (middle) principal of the learning circuit with differential inputs and conventional electronics as neurone. (bottom) example of 3 partiucamlr 3-input functions learned successively by the same series of CNT-devices. Extracted from [1]. 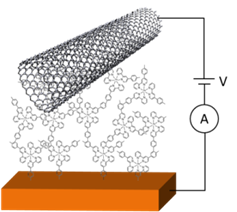 Such use of 3-terminal devices as resistive memory elements, while powerful from a function learning perspective, also has some limitations in terms of ultimate scaling. We thus also study 2-terminal memristors incorporating carbon nanotubes, not as switching medium, but as nano-scale electrodes [9].