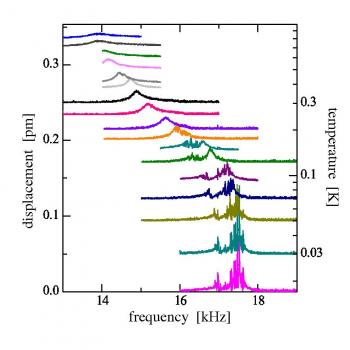 Frequency spectrum of the fundamental mode at various temperatures (amplitude in pico-metres as a function of frequency in kilo-Hertz). The resonance peak shifts to higher frequencies when the temperature, shown on the y-axis to the right in kelvin, is reduced, indicating that the solid sample becomes stiffer.

If it truly does exist, a "supersolid" would represent a new state of matter that combines mechanical rigidity and superfluid properties. This would be a new phase of condensed matter, but whether such a state has indeed been discovered and how it can be reached is still far from clear. As reported in Physical Review B 80 (2009) 140504(R), researchers at SPEC have measured the low frequency elastic properties of solid helium-4 using ultra-sensitive acoustic techniques. Their findings may bring us one step closer to deciphering the mystery of supersolid formation. Their work has been selected as one of the "Editor's Suggestions" for the October 2009 issue of Physical Review B journal by the American Physical Society.

For experimentalists, supersolidity sets in when part of a solid helium sample contained in the bob of a torsional oscillator loses mechanical contact with the container walls. This phenomenon, thought quantum but yet unexplained, takes place below 0.2 kelvin and appears linked to the presence of crystalline defects, most probably dislocation lines. But "to which dislocation lines?" is the question that has been addressed by measuring the stress-strain properties of various badly strained solid helium samples.

As very low stress levels already damage the delicate helium crystals, the SPEC researchers used a highly sensitive sound transducers with a superconducting displacement gauge to measure the induced strain without creating further defects. The displacement resolution was determined to be in the femtometre range. By taking these experimental precautions, they were able to sidestep the stress-strain effects caused by helium crystal damages that are unrelated to the formation of supersolid phase.

Most samples studied in the study grew significantly stiffer at low temperature, below 0.15 kelvin, in agreement with previous work (1), but in an even more pronounced manner. This behaviour is illustrated in Figure 1 that shows the shift in the resonance frequency of the fundamental mode of the acoustic cavity containing the solid sample as it is cooled. This shift is caused by the bowing of the dislocation lines in the acoustic strain field. It reveals that Poisson's ratio* undergoes a huge variation between near absolute zero temperature and 1 K.  As the temperature is raised, dislocation lines gradually "thaw" and become highly mobile to follow the applied acoustic field. Dislocation lines affect the low frequency elastic properties of strained solid helium-4 samples very profoundly around 0.2 -1.0 K. The anomalously large magnitude of the effect reveals that the dislocation network is very dense and highly disorganised. These observations also imply that Peierls' barrier does not hinder dislocation motion, hinting that dislocations in solid helium may be rough at an atomic scale. These findings are very intriguing, and their bearing on a putative supersolid state still needs to be worked out.