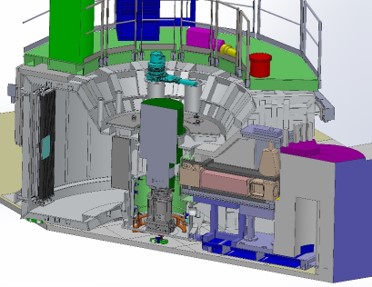 The new SHARP* spectrometer at ILL replaces the IN6 time-of-flight neutron spectrometer, which has been the reference instrument for a long time, offering the highest brightness. To optimize the use of the neutron beam, it became necessary to modernize the instrument. The operation was launched by an agreement between CEA, CNRS and ILL on September 29, 2017. The three entities then entrusted the study, the realization, and then the operation of the instrument to the Léon Brillouin Laboratory (LLB) of CEA Saclay. Its installation around the 58 MW reactor of the ILL was necessary, after the shutdown of the Orphée reactor in Saclay.

With the project thus defined, the detailed design and construction phase of the enclosure was entrusted to SDMS, a boiler making company based in St-Roman in Isère. The close collaboration between SDMS and the LLB's design office resulted in the final design of the diagram below. 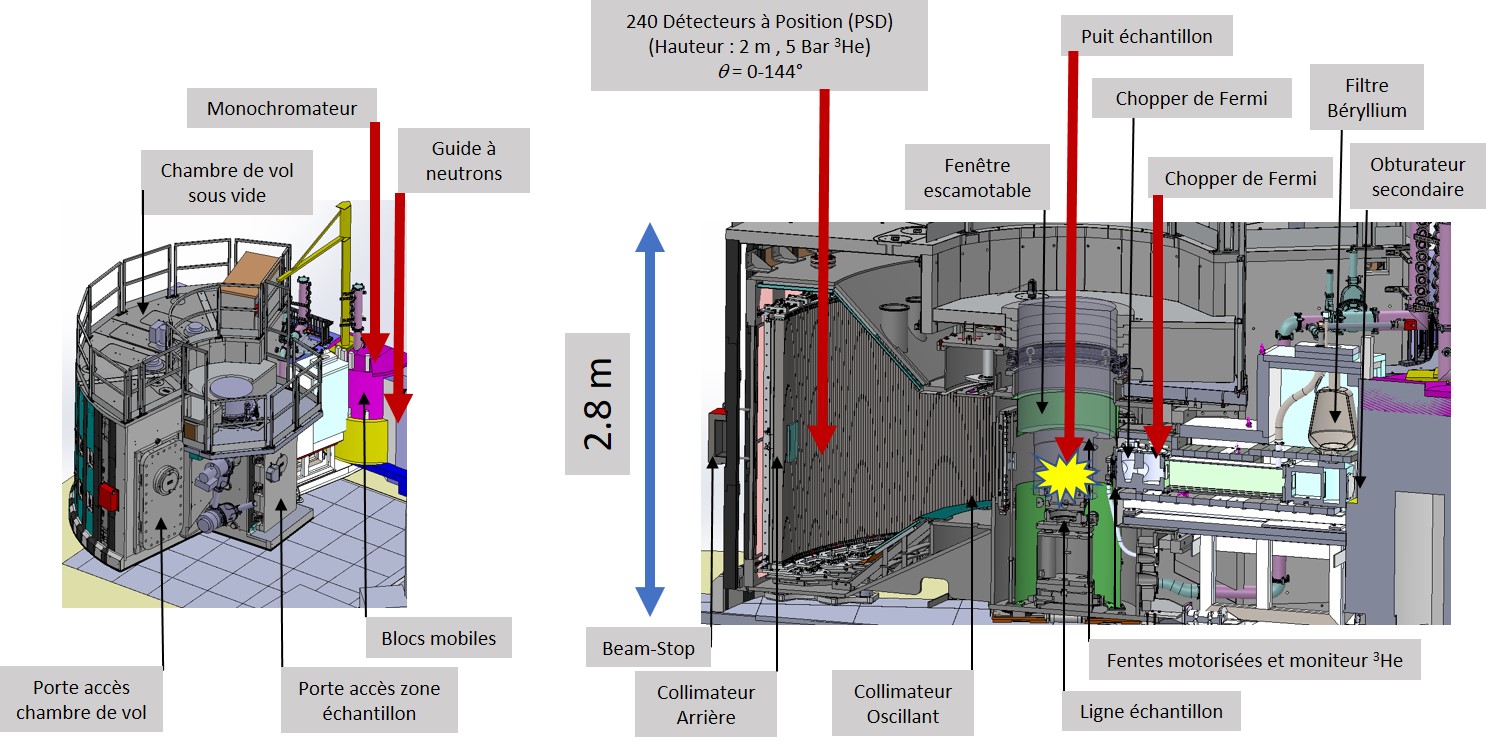 The different elements of the SHARP time-of-flight neutron spectrometer installed at ILL.

Once the boiler making was completed, the installation and equipment of the instrument was exceptionally fast, despite the context of the current epidemic: at the end of October 2020 IN6 was dismantled, and on November 30 a crane deposited the new enclosure weighing about 20 tons in the ILL guide hall via the roof. This was followed by the installation of the latest generation of neutron detectors, and packaging with high-density polyethylene protections, leading to the first effective neutron beam on 21 March 2021, a record time!

Arrival of the bare chamber of the SHARP time-of-flight neutron spectrometer on 30/11/2020 and, after equipment, its installation in the ILL guide hall (photo taken during the 1st beam on 21/03/2021, as indicated in the inset).

The key elements of SHARP, as the latest generation spectrometer, are :

Studies can then begin!

Inelastic neutron scattering is an invaluable probe of microscopic dynamic events that govern the properties of matter: transport properties, magnetism, catalysis and even the function of biological objects. Crystals, soft matter, liquids... are studied in this way; for which it becomes possible to identify, for example, scattering processes, all vibrational phenomena, or phase transitions... 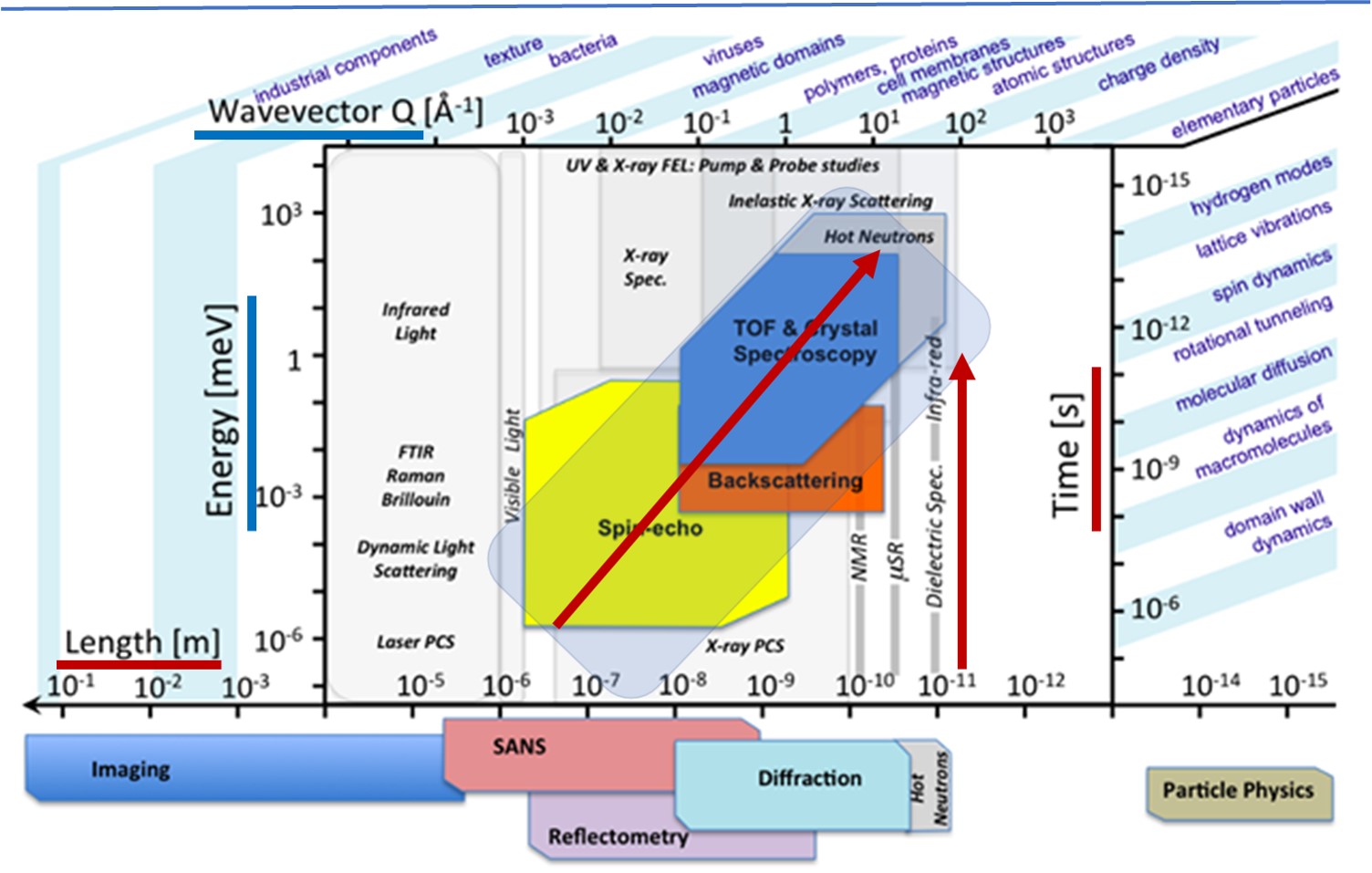 Available space in a length (or scattering vector) - energy (or time) diagram of different spectroscopies, where time-of-flight neutron inelastic scattering techniques occupy a central position. Compared to infrared spectroscopy or dielectric spectroscopy, inelastic neutron scattering has the originality to probe simultaneously and independently, space and time. Inelastic neutron scattering studies give access to atomic and molecular motions over distances from a few tenths to a few tens of nanometers, on time scales from a few picoseconds to a microsecond.

The first study carried out on SHARP was that of the magnetic modes of manganese acetate, a molecular magnet whose magnetism is carried by the manganese atoms: For the neutron scattering study, the very strong scattering of the protons of the acetate (80 barns) completely covers the magnetic signal. The neutron-matter interaction being a nuclear process, it is possible to take advantage of very strong isotopic effects by deuterating (H → D, , 80 barns → 5 barns) the organic part of the sample, thus making the magnetic signal measurable. The detectors in place at SHARP allow a perfect identification of the diffraction rings, related to the crystalline order of the material. The spectroscopic analysis "energy-vector of diffusion" allows then, by applying the principle of conservation of the moment and energy, to identify the magnetic excitations. 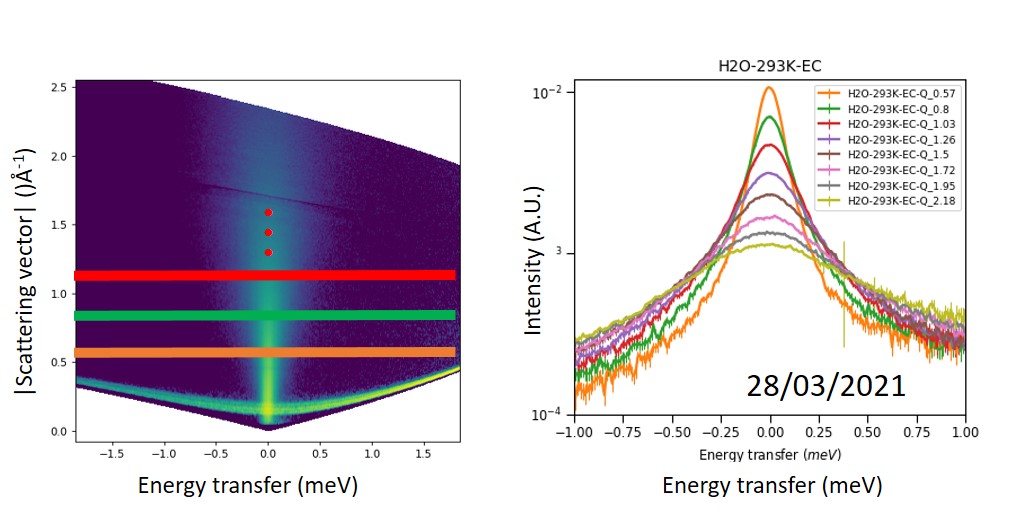 Inelastic neutron scattering in water H2O. Left: "Energy-wave vector" diagram. Profiles at different scattering vectors give the spectra on the left. We observe that the intensity decreases and the spectrum broadens with the wave number, signature of a Fick scattering of water molecules.

This realization would not have been possible without substantial financial support,

The support and technical teams of the LLB and ILL, as well as the support of the CEA and CNRS, supervisory authorities of the LLB, must be deeply acknowledged.