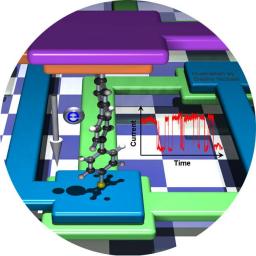 Scientists at the Laboratory of Molecular Electronics (IRAMIS / SPEC) recently published a paper entitled  "Controlled Stability of Molecular Junctions" in the prestigious international journal Angewandte Chemie. The work done in collaboration with the group of Prof. Gianaurelio Cuniberti of the University of Dresden shows the influence of the contact interfaces on transport through single molecules by means of the break-junction method.

In the study of molecular junctions, it is these fluctuations of conductance that are most often studied. Statistical analysis shows that the system stabilizes preferentially on different discrete values of conductance, associated to the different ways the electrical contact is achieved (especially by the number of involved molecules and the exact geometry of the molecule-electrode contact). In this work, the exceptional stability of some molecular junctions allowed to follow the evolution of one junction (fluctuations around the same discrete conductance defined by the first analysis) over a period of several weeks. In this case, statistical analysis of the fluctuations of conduction refers to the temporal evolution of contacts between the electrodes and the molecule.

Comparing two simple molecules (terphenylène P3 and terthiophene T3, both ended by two sulfur atoms), two different behaviors can be pointed out: for junctions formed with the P3 molecule, the conductance exhibit large stochastic fluctuations while, by comparison, it is extremely stable for T3. The strong oscillations can be attributed to shifts in the chemical bonds between sulfur and the gold electrodes. It is not observed in the case of T3 due to the additional sulfur atoms that enhance the electrode-molecule interactions. 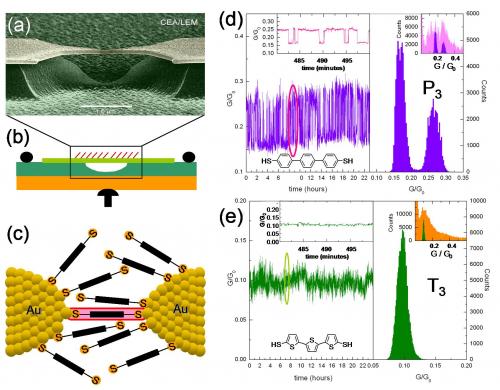 Thus, the statistical analysis of the conductance of "stable" junctions can be well distinguished and offer a valuable complement to the analysis of variations of conductance based on the cycles of open-closed actions of a molecular contact. It can probe fine interactions between molecules and electrodes (see Figure).