Getting an intense pulsed laser beam with femtosecond pulses in the X-ray range still demands many scientific and technological developments. Such beams of high spectral and temporal quality can already be obtained by harmonic generation in gas, but their intensity remains relatively modest. It is shown that a Free-Electron Laser (FEL) device can be used to amplify significantly (> x1000) such light impulsions while preserving their spectral and temporal qualities.

Free Electrons Lasers (FELs) are coherent light sources based on the interaction between packets of relativistic electrons delivered by an accelerator and the light emitted by the very same electrons when they cross an ondulator. FELs naturally deliver an intense (peak power of agenda GW) and tunable radiation with short pulses (sub-picosecond) in a wide spectral band from microwaves (λ~mm) to the extreme Ultra-Violet or XUV (λ ~ 10 nm). For shorter wavelengths, FELs are based on a linear accelerator or LINAC. However, the produced radiation, called Self-Amplified Spontaneous Emission (SASE), although with high brilliance, has only a partial longitudinal coherence. Because of its stochastic nature, the SASE process, initiated from noise, exhibits temporal and spectral profiles with large statistical fluctuations (or spikes) within each impulsion. 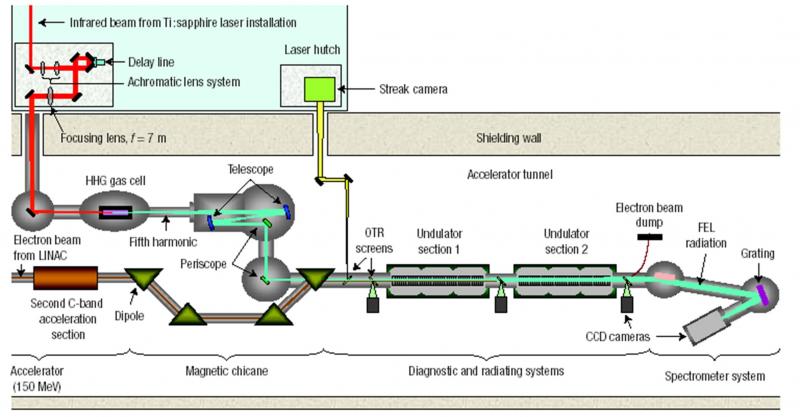 Experimental set up: a laser Ti: Sapphire (800 nm, 20 mJ, 100 fs FWHM, 10 Hz) is focused (lens with focal length f = 7 m) in a xenon filled cell, generating harmonics of the incident beam. Through a periscope and a telescope (mirrors in CaF2), the 5th harmonic (λ = 160 nm) is spectrally selected, re-focalised and injected into the LEL. This beam is temporally and spatially superimposed with the electron beam (150 MeV, 1 ps FWHM, 10 Hz) in both sections (1 and 2) of the ondulator tuned to the selected harmonic.

The original idea was to initiate the amplification by the injection harmonics produced in a gas. Known and developed at IRAMIS (ex DRECAM) since 1989, this type of source delivers harmonics with very short pulse(<100 fs) and a high degree of spatial and temporal coherence. It lets generating photons of VUV to the XUV, reaching harmonic orders much higher than obtained in a crystal. It then becomes possible to inject a FEL with these short wavelengths.

This quite innovative experiment, driven by a CEA-SPAM/SOLEIL/RIKEN collaboration and which is the subject of the PhD thesis of William Lambert, has been carried out in Japan on the prototype of the accelerator SCSS (SASE compact source of SPring-8). On this LINAC, electrons packets are accelerated up to 150 MeV, for a period of 1 ps pulse at a rate of 10 Hz. To be amplified, the selected harmonic beam is transversely spectrally and temporally superimposed to the packets of electrons in the ondulator under vacuum (two sections of 4.5 m long).

The result that we present here is the strong coherent amplification of the 5th harmonic of a laser Ti: Sa, at 160 nm generated in a cell of gas. The phenomenon generates also spectacularly non-linear harmonics of the FEL emission, which are both intense and coherent within a range from 80 nm to 23 nm. The FEL amplified radiation reaches an intensity higher by several orders of magnitude than both that of injected radiation (x 2600) and that of a pure SASE process.

The transverse and spectral distributions are almost Gaussian and the length of saturation of the FEL emission is twice shorter as compared to SASE, which is expected to reduce the size of the apparatus in future facilities. Finally, in view of the low level of injection required, such amplification coupled with the generation of "Non-Linear Harmonics" is expected to generate soft X-radiation up to 1 nm (> 1 keV) and to reach one microjoule.

This result, the first in the world, fully and clearly validates the concept of FEL injection by high order harmonics from a gas, as fourth generation light source based on an electron accelerator that underlies the "ARC EN CIEL" project supported by SOLEIL. 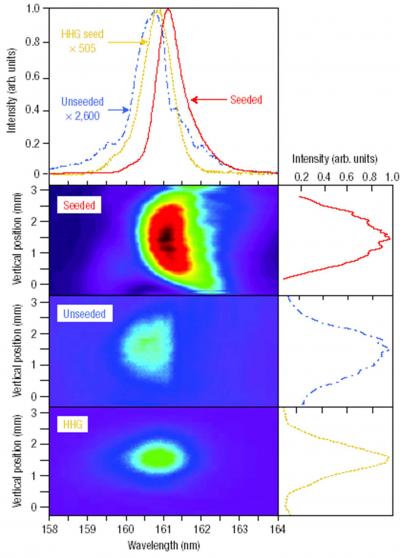 Comparison between the amplified FEL (Seeded), the non-injected SASE (Unseeded) and momentum in the harmonic gas (HHG) at 160 nm, injected into the ondulator. 2D spatial distributions (vertical scale) and spectral (horizontal axis) on the CCD camera of a spectrometer. Spatial 1D cuts (on the right) and spectral (top) are also given. The injected energy is 0.53 nJ and only the first section of the ondulator has been used to reach a gain of 2600.