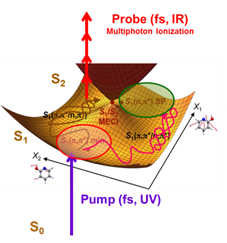 Elementary chemical acts are often associated with the crossing of a saddle point: 2 colliding reagents are climbing up a valley of the ground state potential energy surface which describes their interaction; they reach a saddle point and run downhill a valley toward the reaction products. The landscape is more complicated when electronic excitation is present since several potential surfaces are coupled, often via conical intersections (see Fig.1). Potential surfaces are very distorted in their vicinity, allowing ultra-fast exchanges - ~ 100 fs = 10-13 s or less - between electronic energy and deformation of the molecular skeleton. The Reaction Dynamics group at LIDyL/LFP is very active in this field for clarifying of the role of these intersections. It combines femtochemistry pump-probe experiments with sophisticated theoretical approaches.

A recent result on electronically excited 2-hydroxypyridine revealed a surprising dynamics (REF. and Fig.1). The molecule was excited in the S1 state (Fig.1, purple arrow), in the vicinity of a saddle point where the dominant electronic configuration is pp*. The wave packet which is formed moves out of this area along trajectories as those schemed as red and brown spaghettis in Fig.1. Departure from the excitation area takes place in ca 100 fs, mostly via deformations of the pyridine cycle. A slower presumably chaotic evolution follows (~1.3 ps) when the movement of the H-atom bonded to the O-atom couples other deformations of the molecular skeleton. This corresponds to a roaming behavior of the wave packet which spreads in areas where np* is the dominant electronic configuration. Roaming behaviors have been invoked repeatedly to interpret time unresolved experiments. The reference below reports for the first time their direct observation in a time-resolved femtochemistry experiment.