Covalent grafting on hydrogenated silicon: towards a molecular RTD diode 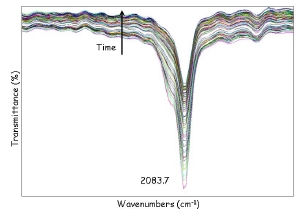 As CMOS goes towards 65nm technology node, the integration of traditional memory cells such as DRAMs and non-volatile Flash gets limited. The solutions proposed for their replacement (FeRAM, MRAM, PCM) show a large energy consumption. Therefore there is still a need for a high-density and ultra low-power memory devices suited to respond to the growing market of wireless Systems On a Chip (SOC). For this purpose, the concept of Negative Differential Resistance memory (NDR) based on Resonant Tunneling molecular Diode (RTD) appears very promising. Indeed, with one of the electrodes a semi-conductor, one can take benefit of the localized density of states.

The "heart" of the device is indeed the interface linkage between the electrode and the molecule, together with the order within the monolayer. Molecules with a σ−π−σ sequence have already been derived from molecular orbital calculations in order to allow significant electron transfer from silicon at moderate voltage (below 3V). Those tri-block molecules were chemically grafted onto hydrogenated silicon surfaces (Si-H) and the resulting monolayers were fully characterized by IRRAS, XPS and ellipsometry. [1-2]

It was thus shown that :

The next part of the project, which belongs to the ANR project "MEMO" (2005-2009), will be devoted to the integration of the SAM within a functional device in order to study the electrical characteristics. Carbon nanotubes will be used as top electrodes, in order to (i) avoid any degradation that might result from direct metal evaporation on the SAM; (ii) limit the actual number of molecules concerned by the electrical measurements. The expected geometry of the final device is given in Fig. 2. Engineered Silicon-On-Insulator (SOI) substrates will be used to generate, by classical lithography, isolated silicon nanowires that will be functionnalized with the σ−π−σ monolayer. Single-wall carbon nanotubes will be selectively deposited on top of the grafted nanowires in a cross-bar architecture, thanks to localized modification of the silica surface with amine-rich molecules.

In parallel, the folowing new grafting methods will be tested for the σ−π−σ monolayer, in order to totally avoid re-oxidation:

Fig 2: Scheme of the RTD device