Covalent grafting of molecular magnets on silicon: towards nano-sized memories 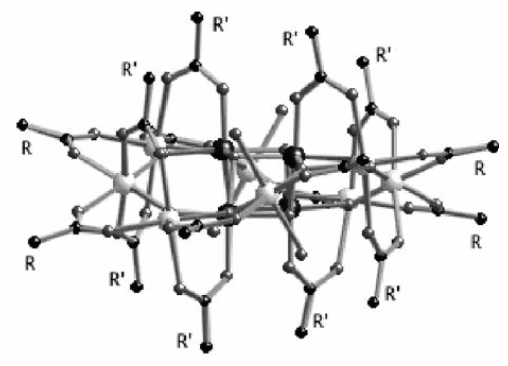 Polynuclear complexes that possess a large spin ground state associated with strong magnetic anisotropy have attracted much attention during the last decade. Such complexes have a magnetic bistability that can be associated to a single molecule. They are called Single Molecule Magnets (SMM).
Among SMMs, the so called Mn12 is still the most studied since it possesses the highest blocking temperature below which bistability occurs. These molecules may be integrated in a device for information storage; quantum calculation may be envisaged as well because Quantum Tunneling of the Magnetization (QTM) was evidenced in some systems.
The very early stage before building molecular devices is to manage manipulating small amounts of molecules and to study their magnetic properties individually. One of the first steps is to achieve systems where a small collection of molecules can be studied. We have chosen to graft them on silicon surfaces.

Mn12 has already been deposited on various surfaces using (i) the Langmuir–Blodgett technique, (ii) spontaneous grafting on gold by using a thiol-modified Mn12 complex, (iii) deposition of the biphenyl derivative of Mn12 and nanopatterning on polycarbonate films …None of those techniques allows controlling the orientation of the Mn12 moiety. We demonstrated that by using a mixed Mn12 complex (i.e. containing two different carboxylate groups) it is possible to graft a monolayer in an oriented manner on a silicon substrate.

We selected a Mn12 complex possessing dichloroacetate groups in axial positions and tert-butyl acetate groups in equatorial positions. That complex was allowed to interact with silicon substrates bearing chemically grafted carboxylic units (obtained from thermal grafting of undecylenic acid on Si-H(100) surfaces). ATR-FTIR spectra show that the carboxylic band at 1718 cm-1 almost vanishes after the immersion of the substrate in the Mn12 solution, which is the first evidence for the grafting of molecules by carboxylate substitution.

XPS fine analysis allowed to demonstrate the orientation of the grafted Mn12 moieties. First, the Mn3s signal undoubtedly shows that the integrity of the Mn12 molecule is preserved upon the grafting process: indeed, the energy splitting of the Mn3s multiplet remains constant and consistent with the average oxidation state of 3.3.

Second, the orientation of the grafted molecules was deduced from the Mn2p and the Cl2p XPS signals. The Mn/Cl ratios extracted from the XPS data provided information on the nature of the substituted carboxylates: if only equatorial tert-butyl acetates were exchanged upon grafting on the acid-functionalised Si surface, no difference in the Mn/Cl ratio should be observed between the free and grafted Mn12 clusters (theoretical value Mn/Cl = 0.75), whereas axial substitution should lead to a minimum of four remaining dichloroacetates (Mn/Cl = 1.5) out of the eight present on the non-grafted cluster. If substitution occurred in a random way, an average value of 6 remaining dichloroacetates would be expected, thus leading to a ratio Mn/Cl = 1. Hence, the value of Mn/Cl = 0.74 ± 0.04 obtained on the grafted substrate means that the substitution proceeds only through replacement of equatorial tert-butyl acetate groups. Such a result may be at a first glance surprising because one may expect a substitution of the axial carboxylate groups less tightly linked to the Mn atoms because of the Jahn–Teller effect. However, this cannot actually be the case because the substrate is functionalised by carboxylic acid groups and not carboxylate groups. Indeed, the driving force of the reaction is the formation of the weakest acid, hence tert-butylacetic acid rather than dichloroacetic acid. Furthermore, the thermodynamically most stable bonds should form, i.e. those corresponding to the strongest Mn–carboxylate bonds which are the equatorial ones where no Jahn–Teller effect is present. 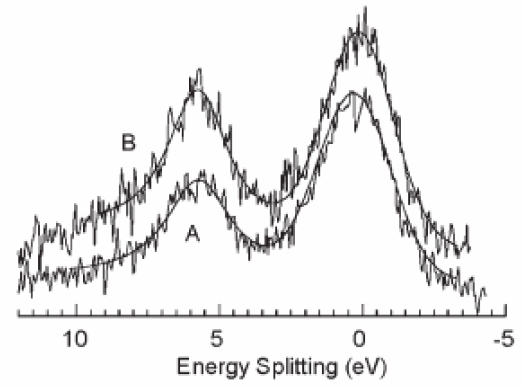