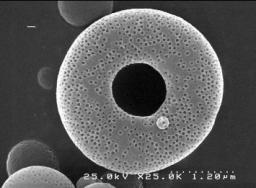 Example of a doughnut-like grain obtained upon drying a solution containing a mixture of 5 nm silica nanoparticles with 50 nm polybromostyrene sulfonate. The grain was observed before complete calcination.

A complete measure of the structure by SAXS at the absolute scale is one way to obtain a quantitative investigation of the homogeneity. Moreover, the evaporation and the related organisation of nanoparticles can be probed in situ thanks to the high brilliance of the light source. Therefore our aim was to investigate the organisation at different scales during the complete drying sequence. Experiments were performed at beamline ID02, where a vertically mobile spray-drying system was set up (Figure 60). It allowed the whole process of grain drying and organisation to be traced directly inside the hot tube. A spray (

SiO2=2%) aqueous suspension of nanosilica (25 nm) was generated. After the evaporation profile reached equilibrium, the spray structure was scanned vertically along 50 cm of the tube (along which the temperature rose from 25°C to more than 100°C). 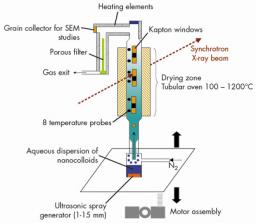 Schematic representation of the spray dryer apparatus. The whole setup is displaced vertically through the beam to explore the temperature gradient.

Porod plots of the scattered intensity at different heights in the drying tube (corresponding to increasing temperatures). The doted lines represent the fit by a model taking into account the slow evaporation of water from the droplets, allowing a full reconformation of the nanoparticles inside the wet droplets until completion of the drying process.

Figure presents the evolution of I(q) when the system transforms from a dilute suspension of nanoparticles to densely-packed dried grains, the whole process occurring in 20 seconds.

From a quantitative model that takes into account the kinetics of evaporation inside the tube and the size distribution of the initial droplets in the spray, we are able to conclude that the compression is isotropic for the conditions (200-600°C) at which this spray system (and many others) usually work. Moreover, the occurrence of a layered morphology with a dense shell around a dilute core was invalidated since the quantitative variation of the scattering profile for such a case did not follow the experimental evolution of the scattering data (Figure 61) unlike the isotropic compression case as mentioned before. The source of the sphere-doughnut transition on a larger scale is yet to be found. However, slow drying does allow organised powders to be obtained, where pretty hexagonal organisation can be observed from the core to the surface of the grains [2].