Since the invention of the laser, thesearch for shorter wavelengths, up to the X-ray range is a permanent concern. One way to generate such XUV radiation is to focus an intense laser beam in a material. The material responds to the strong external stress in a non-linear way, producing high order harmonics of the fundamental frequency excitation.

During the last fifteen years, atomic or molecular systems are used as frequency converters. It is the harmonic generation in gases (see the highlight of 13 May 08: "Using molecules to control attosecond light pulses"). These harmonics have temporal and spatial properties of particular interest that is reflected in the time domain because they are emitted as attosecond pulse trains, and exhibit an excellent spatiial coherence. In that way, the properties of the XUV beams match those of the primary laser excitation.

Recently, another way to generate those high frequencies appeared and is in full development. The idea is to use the surface of a solid, otherwise known as a "plasma mirror" (see the highlight of September 2006: "Plasma mirrors: from high intensity physics to new light sources") where the light of an incoming high intensity laser beam (> 1017 W/cm2) is focused and reflected.

However, in that case, the coherence of the beam, essential for applications such as coherent imaging, had never been demonstrated. To this aim, the Ultra High Intensity (UHI) 10 TW laser of Saclay ihas been used. A comb for modulating the amplitude, calculated to generate by diffraction 3 spots on the surface of the plasma mirror is placed in the incident very clean beam before focusing. The intensity is maximum at the center and both side spots have the same relative intensity of the order of 40% as compared to the center (see Figure 1). Each of these spots generates high order harmonics that spread freely over a distance enough for the slightly divergent beams to overlap. The result of the superposition is shown in Figure 2. 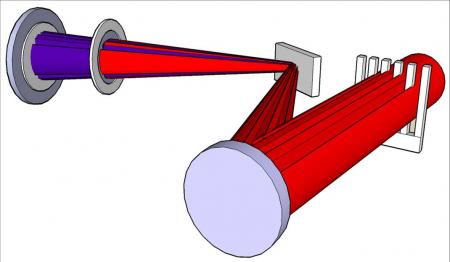 Experimental setup: A comb shaped mask splits the incident beam (Laser UHI 10 TW Saclay) into three beams which are focused on the mirror. The intensity ratio between the central and lateral spots, which are separated by 40 µm, is 0.57. The superposition of spatial harmonics generated by the three beams generates an interference pattern.

Interference diagram of three beams issued from the same XUV mirror plasma. In the cut shown on the right, the contrast is of 80%.

As shown by the spatial profile of the far-field harmonic beam, interferences between the three sources were observed with an almost perfect contrast. This simple result demonstrates the coherence between the different beams produced by the plasma mirror. It shows that, while the environment and the mechanism for the harmonic generation is complex, the source is coherent, i.e. that the phase properties of the incident light is preserved.

To our knowledge, it is the first direct evidence of the intrinsic coherence of a frequency conversion process in dense plasma. These properties can be used to implement in the XUV range, and with an excellent temporal resolution, different techniques as powerful optical interferometry or holography.

However, to fully demonstrate the potential of harmonic generation by plasma mirrors, in terms of radiation source, the structure of the attosecond field generated remains to be observed. Such an attosecond structure has up to now only been demonstrated  for harmonics generated in gases. The PHI team is then actively working on this hot topics.

Previous highlights on the subject: