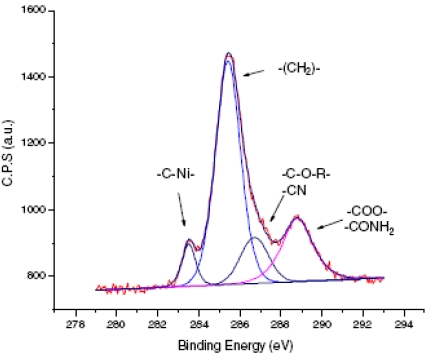 XPS spectra (C1s area) of the Nickel surface after electrografting of crotononitrile.

Cathodic electropolymerization has already proven its ability to produce robust and conformal organic films chemically grafted on metallic and semiconducting surfaces used in various domains such as microelectronics, biomedical applications, soldering, chemical waste treatment or corrosion protection. Contrary to the electrodeposition of semi-conducting polymers like polypyrrole or polyaniline, strong covalent bonds between the cathode and the polymer film area created during the process, as indirectly proved by numerous studies including chemical post-treatments, electrografting on rotating electrodes or mechanical measurements. A direct evidence can however be obtained from XPS.
Probing the chemical interface between a polymer film and a metallic substrate is very difficult. Indeed, the interface is "buried" under the polymer film and thus difficult to reach. For instance, XPS cannot probe more deeply than ca. 15 nm below the outmost surface. It is thus necessary to limit the growth of the polymeric film to be able to probe the interfacial signature.
This was done by using a redox active molecule that cannot polymerize. Indeed, with classical vinylic monomers such as acrylonitrile or methyl methacrylate, the grafting step that immediately follows the electron transfer from the cathode, gives a very unstable species bearing a negative charge very close to a negatively charged electrode. The instability is classically relaxed by the polymerization that moves away the charged species from the electrode.

With crotononitrile, another relaxation route is possible through a proton transfer that "heals" the carbanion before polymerization occurs. Hence, ultrathin grafted films are obtained. XPS analysis of the resulting films allows the direct observation of the carbon-metal bond that is buried under the grafted film and contributes greatly to its robustness. A clear and distinct peak at 283.5 eV is observed which is attributed to C-Ni bonding. Its full width at mid-height is only 0.8 eV, which indicates that the bonding is probably perpendicular to the surface.