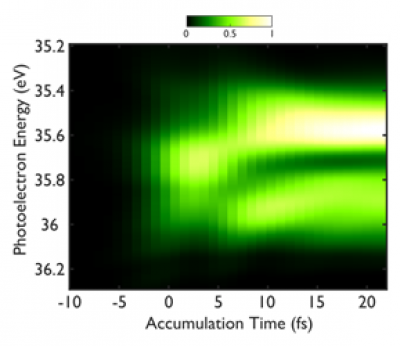 Resolving in time the ultrafast buildup of an autoionizing resonance

In collaboration with two theory groups (LCPMR-Paris and UAM-Madrid), we have developed a new technique called ‘Rainbow Rabbit’ based on coherent multi-color ionization by an attosecond pulse train precisely synchronized with an infrared laser pulse. This technique gives direct access to the spectral amplitude and phase of the resonant electron wave packet emitted in the continuum. A Fourier transform then allows us to resolve the ultrafast buildup of the autoionizing resonance, revealing the decomposition of the process in two nearly consecutive steps governed by fairly different time scales (Fig. 1): during the first 3 fs, the direct ionization channel dominates; then, the resonant path starts contributing as the doubly excited state decays in the continuum, resulting in interferences between the two channels that ultimately shape the Fano profile. This technique opens multiple opportunities for studying ultrafast strongly correlated dynamics in a variety of systems, from molecules and nanostructures to surfaces, and controlling matter changes at a most fundamental level.

Circularly-polarized light is a remarkable probe of chirality and magnetization. The advent of ultrashort pulses in the extreme ultraviolet (XUV) and soft X-ray ranges produced by high harmonic generation (HHG) has opened the prospect of studying these phenomena on the (sub-) femtosecond natural timescales of electronic dynamics and magnetic interactions with atomic selectivity.
However, two major problems had to be solved: i) how to produce efficiently circularly-polarized HHG, and ii) how to fully characterize its polarization state.

As for ii), a complete polarimetry is particularly difficult in the XUV range where most materials strongly absorb and disperse radiation, and where broadband quarter waveplates are not available. The investigations of the polarization properties of the harmonic emission started 20 years ago [Weihe et al, PRA 1995], but up to now, all measurements were incomplete and had to rely on the assumption th256at the XUV light was fully polarized.
The ‘molecular polarimetry method’, first developed by the group of Danielle Dowek (ISMO-Orsay University) on the SOLEIL synchrotron [Veyrinas et al, PRA 2013], is based on the dissociative ionization of NO molecules induced by the XUV light. By measuring in coincidence the emitted electron and N+ ion in a COLTRIMS-type reaction microscope, one retrieves the molecular-frame photoelectron angular distributions (MFPAD) that encapsulate simultaneously all three Stokes parameters of the XUV light. This provides a complete characterization of the polarization state, with direct access to the ellipticity absolute value and sign, as well as to the degree of polarization of individual harmonic orders. Applying the technique to the 1-kHz harmonic source at CEA-Saclay was a real experimental challenge, requiring in particular 3-hour acquisition times.

As for i), we investigated two schemes for producing highly elliptical XUV light: HHG in SF6 molecules induced by an elliptically-polarized laser [Veyrinas et al, Faraday Discussion 2016], and HHG in argon induced by two counter-rotating circularly-polarized laser fields at the fundamental and second harmonic frequencies of the laser [Barreau et al, Nature Communications 2018]. The first scheme was able to produce high ellipticities but only for 2 harmonic orders, and with low conversion efficiency.
The real surprise came with the second scheme that had recently been revived [Fleischer et al., Nature Photon. 2014] due to its potential for producing efficiently circularly-polarized XUV emission extending to the X-rays [Fan et al., PNAS 2015]. The 3q+1 (3q+2) harmonic orders were supposed to be circularly-polarized like the w- (2w-) field, respectively. Our complete characterization revealed unexpected features, such as significant depolarization as well as deviations from circularity.
This came as a surprise since it was generally considered that, in ‘non-pathological’ generation conditions, the coherence of the HHG process would result in fully-polarized emission. We performed a theoretical study that evidenced that ultrashort driving fields as well as ultrafast ionization lead to a breaking of the dynamical symmetry, resulting in depolarization and deviations from circularity (see figure).

The significance of our findings is manifold: on a fundamental point-of-view, they provide a more complete understanding of the HHG process and of its polarization properties; on an applied point-of-view, they open the way to an optimized well-characterized source of ultrashort circularly-polarized XUV radiation, of interest to a large community studying ultrafast dichroisms, from solid-state physicists to chemists. 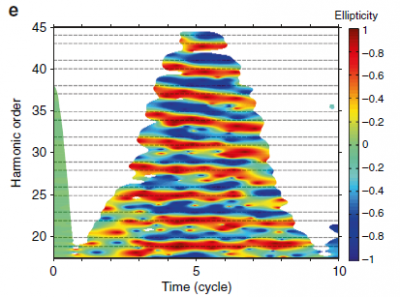 Simulation of HHG driven by ultrashort bichromatic counter-circular fields : Time-frequency representation of the harmonic ellipticity, showing the alternating helicity of the 3q+1 and 3q+2 harmonics, but also their time inhomogeneity leading to significant depolarization.