General diagram of an XPS setup or ESCA (Electron Spectroscopy for Chemical Analysis):

Semi-quantitative analyses can be also extracted from normalized XPS spectra while being based on the height of the peaks and surface under the peaks. The identification of the chemical state of an element can be obtained starting from the exact measurement of the position of the peaks and their separations in energy.

The analyzer (4), which allows a selection in energy of the photoelectrons, consists of two hemispherical electrodes. The potential difference between these two electrodes defines the path energy of the electrons. Only the electrons having a kinetic energy included in an interval of energy centered on this path energy will arrive at the detector. At the end of the analyzer a multiplying detector (channeltron) which makes it possible to create secondary electrons. 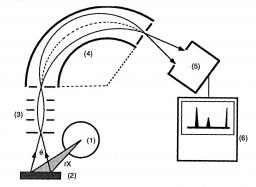 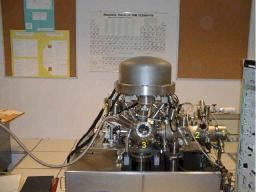 This experiment is an ultra-high vacuum setup dedicated to the X and UV photoelectrons spectroscopy. It is composed of three chambers:

- the introduction chamber of the samples (1)

- the preparation chamber (2) (p=10-10 mbar) which is equipped: of two ovens. One to heat the samples until 500°C by Joule effect and the other being able to reach approximately 1000°C by electronic bombardment. of a gun allowing the ionic bombardment of surfaces by Ar+ ions. of a leak-valve allowing the gas introduction into the chamber.

- the analysis chamber (photo below) (3) (p= 10-10 mbar) which is equipped: of a Al/Mg X-ray source of a UV source(HeI and HeII) of a hemispherical analyzer with five channeltrons

The spectrometer is coupled with a computer equipped with the Eclipse software (VG scientific) allowing the data acquisition and analysis. 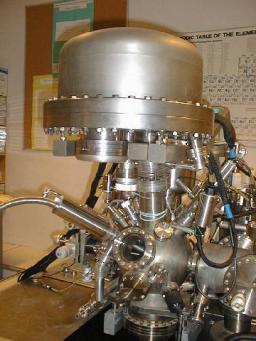