Granular matter : Some applications of our research
Olivier Dauchot 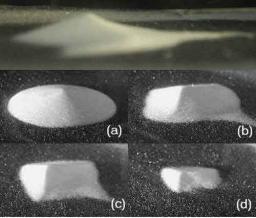 Dunes dynamics has strong impact on the ecology and the economy of sandy areas, but is far from being understood. Since the work on sand dune formation by R.A. Bagnold, a world wide inventory of dunes has been developed. The most common dune, the so-called barchan, has a typical crescent shape normal to the wind, with arms downwind and forms under mono-directional winds. Various models call for more experimental data. On one hand, field measurements are difficult to perform and often incomplete. On the other hand, it is believed that dunes have a minimal size of the order of one meter, not reducible to smaller laboratory scales. We have set up a wind channel where to conduct experiments with sand and we have shown experimentally that an initial sand pile, under a wind flow charged in sand, flattens and exhibits a typical barchan shape before disappearing. An evolution law has been proposed for the profile and the summit of the dune. The dune dynamics is shape invariant. The invariant shape, the "dune function", was isolated. Our results, which clearly demonstrates the feasibility of dunes in the lab, open a new way of investigations in desert studies.

In collaboration with CEA/Grenoble (DRT/DTEN), we have studied problems related to metallic powder flows in industrial processes. In particular, the filling of containers must be reproducible, homogenous and as fast as possible while the powders consist in complex mixing of different components. We have started characterizing the behaviour of model powders using a rotating drum and flows in cylindrical tubes. Though the powders are very similar (composition, granulometry), very different behaviors can be observed.