See the IRAMIS highlight and the CEA-CNRS-ENS press release

Web site of the VKS collaboration

Dynamo action, the spontaneous generation of a magnetic field in a flow of conducting fluid, is supposed to be at the origin of the planets and stars magnetic fields. A lot of theoretical and numerical work has been devoted to this problem and it has been demonstrated experimentally in constrained model flows in recent experiments in Riga (Ponomarenko flow) and Karlsruhe (Roberts flow). A demonstration in the case of an unconstrained, turbulent flow, closer to the natural case, is still lacking.
This is mainly due to the fact that to build a dynamo, one must use liquid sodium, with all its incumbent dangers. Moreover, the dynamo will work only if the advection of the magnetic field and generation of current are fast compared to dissipation - namely if the magnetic Reynolds number exceeds a critical value, which strongly depends on the geometry of the flow.

Besides Riga and Karlsruhe, there are several groups around the World working on different dynamo projects: Maryland, Wisconsin and Socorro in USA, Perm in Russia and Grenoble and VKS in France. In France, the dynamo community is gathered through the GDR dynamo led by B. Dubrulle.

In collaboration with S. Fauve (ENS Paris), J.F. Pinton and P. Odier (ENS Lyon), we have designed, constructed and run a liquid sodium experiment called von Karman sodium - VKS - in CEA/Cadarache (DEN/DER/STR). The first configurations have been designed after the results obtained in the water prototype associated with numerical simulations of the induction equation. No dynamo action was observed in this first set of experiments, but many new results concerning the magnetic induction in a turbulent conducting flow have been obtained.

Numerical analysis
A numerical study of the magnetic induction equation has been performed on von K\'arm\'an type flows in collaboration with J. L\'eorat (Meudon Observatory) and J. Burguete (Pamplona University). The mean velocity fields have been measured for different configurations and are introduced in a periodic cylindrical kinematic dynamo code. Depending on the driving configuration, on the poloidal to toroidal flow ratio and on the conductivity of boundaries, some flows are observed to sustain growing magnetic fields for magnetic Reynolds numbers accessible to a sodium experiment .

The response of the flow to an external magnetic field has also been studied: The results are in excellent agreement with experimental results obtained in the VKS experiment in the single propeller case but can differ in the two propellers case.

The perspectives now concern the optimisation of the flow (propellers and container) in order to reach the lowest critical power configuration and understanding the current and magnetic field pattern and its interaction with boundaries.

Von Karman Sodium Experiments
The first experiment consists of a cylindrical container of diameter 40 cm and length 40 cm filled with liquid sodium. The system is driven by two counter (or co) rotating co-axial propellers driven by two 75 kW motors. The container is a part of a sodium loop, including tank, purification unit, electromagnetic pumps and flowmeters. The magnetic field is measured by a 3-axes Hall probe and pressure fluctuations as well as temperature, speed and injected power are recorded during the runs. Two pairs of induction coils are placed in the axial and transverse directions to impose an external field.
We have first studied the magnetic induction in the case of two counter-rotating propellers at integral magnetic Reynolds numbers up to 60. 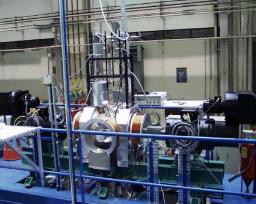 Photography of the experimental sodium setup

More precisely, we measure the magnetic field induced by the flow motion in the presence of a weak external field. Because of the very small value of the magnetic Prandtl number of all liquid metals, flows with even modest R_m are strongly turbulent. Large mean induction effects are observed over a fluctuating background. As expected from the von Karman flow geometry, the induction is strongly anisotropic. The main contributions are the generation of an azimuthal induced field when the applied field is in the axial direction (an W-effect) and the generation of axial induced field when the applied field is the transverse direction (as in a large scale a-effect).

Strong fluctuations of the induced field, due to the flow non-stationarity, occur over time scales slower than the flow forcing frequency. In the spectral domain, they display a 1/f spectral slope. At smaller scales (and larger frequencies) the turbulent fluctuations are in agreement with a Kolmogorov modeling of passive vector dynamics.

We have then studied the magnetic field induced for the flow driven by one rotating propeller and submitted to a transverse magnetic field. In this case, the induced field can behave nonlinearly as a function of R_m. At low R_m, the induced mean field along the axis of the flow first behave like R_m^2 and its sign is determined by the flow helicity. The one parallel to the external field also behaves like R_m^2 wheras the third component is linear in R_m. At higher R_m, the field strongly depends on the local geometry of the mean flow.

A campaign of ultrasonic measurements in sodium has been performed in a dedicated smaller experiment using a special ultrasonic probe developped by CEA for fast breeder reactors related to a commercial apparatus (DOP Signal Processing S.A.). We have obtained one of the very first quantitative velocity fields in sodium. A new experiment (VKS2) is currently in construction. It is planned for 2004 and designed to avoid the main drawbacks of the first VKS experiment: (i) presence of a sodium cooler to conduct experiments at full power during longer periods (50 sec. only in VKS1); (ii) new sealings to avoid the presence of argon gas in the container; (iii) new flow configuration and power increased to 300 kW. With these characteristics, the dynamo threshold based on the mean flow is expected to be in the range of available power.