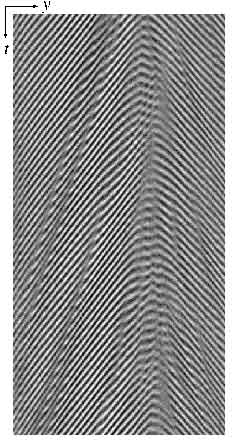 Nonlinear Dynamics of traveling waves in 1-D extended systems has been a central research activity in our group since about ten years. Experimental studies have been carried with hydrothermal waves produced by thermocapillary flows in thin layers of fluids. This activity is now terminated, and concluding work has been achieved within the last two years (1-D), or is under progress (2-D).

Modulated Amplitude Waves A synthesis of the dynamical processes involved in the propagation of spatio-temporal modulations  of nonlinear waves has been reported in a pair of large papers. Special attention has been given on the comparison to recent theoretical and numerical work by groups in Leiden and Firenze. A class   of modulated wave solutions of the Complex Coupled Ginzburg-Landau Equation system (CCGLE), called "Modulated Amplitude Waves" (MAWs) have been successfully identified to experimental patterns: stable and turbulent modulations as well as patterns evolving in time towards topological defects (spatio-temporal dislocations) have been recognized. The experimental stability and meta-stability of Eckhaus traveling modulated patterns  are understood by the collapse of a stable and an unstable branch into a Saddle-node transition point. Spatio-temporal chaotic regimes The annular 1-D wave experiment has finally been pushed into spatio-temporal chaotic regimes at high level of constraint parameter, well above the onset of primary and secondary instabilities. We observed chaotic behaviors due to the complex dynamics of topological defects, i.e., traveling holes and/or sources and sinks, which denotes a strong competition between right and left traveling-waves. At very high constraint (four times the linear instability threshold of traveling waves), the spatio-temporally chaotic system tends to become composed of both right- and left-traveling waves patches, recovering globally and statistically its basic right/left symmetry broken at the wave threshold. The individual dynamics of the topological defects may be either quite regular (sources, holes) or erratic (sinks, holes) and we tried to connect the statistics of these structures with the nonlinear stability of the local underlying traveling-wave patterns. 2D-systems Yet unpublished data related to the wave stability in 2-D systems are currently under consideration within a collaboration (Picasso Integrated Action) with colleagues at Pamplona University (J. Burguete, C. Perez-Garcia), ENS Paris (B. Etchebarria) and ENS Lyon (N. Garnier). Our goal is a quantitative comparison between 2-D experimental data of onset waves with theoretical linear analysis involving complete convective/absolute treatment of the transition.