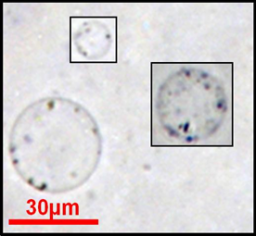 Carbonated mineralization as carried out by living organisms like seashells is a very intriguing process leading to crystalline materials that diffract like single crystals while adopting very sophisticated shapes. Nacre is a paradigmatic example of biomineralization, made of water-insoluble organic compartments filled with a CaCO3 mineral phase. We successively considered two model systems to mimic the influence of an organic template on mineralization: first, β-sheet peptide monolayers at the air-water interface and then giant unilamellar polymer vesicles.

Concerning the first model system, two different peptidic sequences, named LSFD and LDFD (respectively 12 and 11 amino-acid long), were designed and evaluated with respect to their ability to form β-sheet layers at the air-water interface[1] and to induce a specific CaCO3 crystallization by selecting the nucleated polymorph and/or its crystallographic orientation.[2] Although the two sequences exhibit a β-sheet conformation at the air-water interface and form 2D crystalline domains, they show unable to direct the mineralization: the selected crystalline polymorph is switched from calcite to vaterite when the interface is covered by any of the two peptidic films, but probably owing to a kinetic effect. Moreover, vaterite crystals appear as a 3D powder with no preferred orientation with respect to the organic “template”. Surprisingly, the Langmuir film made from the more acidic peptide (LDFD) remains stable upon mineralization whereas the LSFD peptide film gets destabilized, likely through an adsorption of the peptides on the growing crystallites.

To enable kinetic studies of the reaction occurring within the vesicular microreactor, we have designed a microfluidic trapping device that allows immobilization, engineering and microscopic observations of soft objects like vesicles.[2]

The studies of the two previous systems have underlined the limits of a model system that ignores the influence of the water-soluble organic molecules in biomineralization. In recent experiments, this soluble part was extracted from nacre and used as organic additives in CaCO3 precipitation experiments.[3] The results evidenced the influence of the soluble organics in the formation of a mineral nanostructure similar to the one observed in nacre.