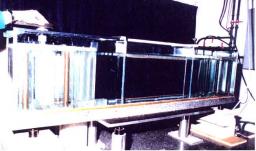 Studying transition to turbulence, one has to consider two kinds of flows, those subjected to volume force such as gravity, and those dominated by shear. The Rayleigh-Bénard flow (a fluid layer heated from below, in the presence of gravity) as well as the co-rotating Taylor-Couette flow (a fluid layer driven by two co-rotating concentric cylinders) are two very well known instances of the first kind of flow. The volume forces acting inside the flow often generate various linear instabilities of the thermodynamical solution branch. In this case the flow restabilizes in a new state, close enough to the basic state, so that it can be described in a rather simple way, mainly based on a modal description. Usually, the transition to turbulence then occurs through successive linear instabilities, the flow becoming more and more disordered in space and time. These transition are often called super-critical transtion to turbulence. In the case of shear flows, such as the plane Couette flow, or the contra-rotating Taylor-Couette flow, turbulence must be sustained by the shear forces and the flow inertia only. In tghis later case, the transition occurs for Reynolds number (inertial forces to viscous forces ratio) much lower than the linear instability threshold, and in some case when there is no linear instability at all. The transition in this case must be driven by finite amplitude disturnbances. The bifurcated flow is very different from the basic state and already presents a high level of disorder. Up to know, it remains out of reach of most numerical studies as well as theoretical approaches. These transitons, often called subcritical transition to turbulence are our major focus here.

We have set up two experiments to study subcritical transition to turbulence. The first one in a plane Couette flow appartatus. The plane Couette flow is known to be linearly stable for any Reynolds number, so that its transition to turbulence can be considered as the prototype of subcritical tarnsitions. The second one is a Taylor-Couette apparatus, in which both supercritical and subcritical transitions can be studied. Both visualizations, image processing and laser doppler velocimetry are performed on these flows.

The plane Couette flow is a plane shear flow between two walls made of an infinite plastic belt. The gap between the wall may vary between 7mm and 1mm. Our working fluid is water. The flow is visualized by seeding the flow with Kalliroscope flakes and llighten it with an Argon lazer sheet. The Taylor Couette flow is achieved between two concentric cylinders, which rotate independantly.The external cylinder as an inner radius of 100 mm. The gap between the two cylinders may vary between 25 mm and a bit less than 1 mm. In this last configuration, our TC apparatus is the largest aspect ratio ever. The apparatus is thermalized with a continuous flow, inside the internal cylinder. The flow is seeded with Kalliroscope flakes for visualizations. In order to avoid parasitic reflections, the inner cylinder is covered with a fluorescent film, and the apparatus is lightened with dark light, so that everything happens as if the flow was lightened from inside. 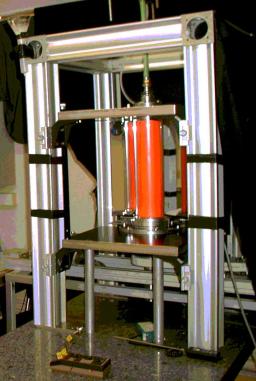 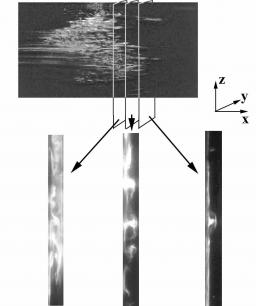 Tranisition to turbulence via Spatio-Temporal Intermittency For the past few years a number of experimental and numerical studies have lead to the formulation of several characteristic features of the subcritical transition to turbulence (1) Subcriticality: Whereas the laminar velocity profile is stable to infinitesimal perturbations for all Reynolds number, infinite amplitude perturbations may trigger an abrupt transition for R > Rg, leading to the observation of a sustained disordered flow. (2) Spatio-temporal intermittency: This disordered flow is made of turbulent domains, which move, grow, decay, split and merge leading to spatio-temporal intermittency, that is a coexistence dynamics in which active/ turbulent regions may invade absorbing/laminar ones where turbulence cannot emerge spontaneously. (3) Meta-stability: There exists a range of Reynolds number Ru < R < Rg for which the spatio-temporal intermittent regime is sustained for long times but not asymptotically, whatever the perturbation. (4) Transients: When the perturbation does not lead to the sustained spatio-temporally intermittent regime, it may either relax rapidly or exhibit long-lived transients These transients occur for Ru < R < Rg, but also for R > , when the perturbation is not strong enough. (5) Strong dependence on the perturbation: The system response to the infinite amplitude triggering can be very dispersed. For a given Reynolds number and almost identical disturbances, the flow may either relax to the laminar flow rapidly or transiently, or become a sustained disordered flow. (6) Unstable states: Various unstable infinite amplitude solutions made of streamwise vortices and streaks coexist for a transitional Reynolds number. The turbulent state is reminiscent of these states.

Reverse transition from turbulence : a long wavelength bifurcation from the turbulent flow The "barber pole structure of turbulence" between two counter-rotating cylinders, also called spiral turbulence, is commonly described as alternating helical stripes of laminar and turbulent flow. There are few quantitative studies of this puzzling regime, where long range order coexists with small scale turbulence. Performing measurements in large aspect ratio Taylor-Couette flow, we have shown that the spiral turbulence bifurcates continuously from the turbulent flow, appearing as a modulated turbulent state. Also measurements of the turbulent stripes width relatively to the pattern wavelength have allowed us to describe the relaxation mechanism followed between the modulated turbulent state and the laminar-turbulent coexistence. Finally, we could perform experiments in a very large aspect ratio plane-Couette flow and show that turbulent stripes with exactly the same characteristics also occur in a planar geometry.