The physics of active matter is a new topic dealing with systems where energy is spent locally to produce persistent, directed motion. Numerous situations are concerned in natural and in man-made systems at all scales,  from the collective displacement of large groups of animals, swarms of robots without central control, bacteria and amoeba colonies, cells in organs, down to the subcellular level where molecular motors who transform chemical energy into mechanical work are in charge of many transport processes and of the general, large-scale integrity of the cell.

It is in this last context that well-controlled in vitro experiments on active matter are nowadays possible: purified biological components extracted from living cells are mixed in well-defined conditions, giving rise to large-scale, self-organized, cooperative phenomena which can be observed under the microscope via fluorescent marking.

The experiment performed in the group of Professor Kazuhiro Oiwa, at the Advanced Information and Communication Technology Research Institute near Kobe, Japan, consisted in putting microtubules (ubiquitous polymeric filaments present in most biological cells) in contact with a high-density carpet of dynein molecular motors 1 grafted to a substrate. In presence of ATP, the dynein heads attach to the microtubules and cooperatively move them around in a smooth, steady, two-dimensional motion. In a few minutes, a lattice of vortices spontaneously appear, which have a very large diameter (about 400 um) compared to the microtubule's length (about 10 um).

Under the supervision of Hugues Chaté (IRAMIS/SPEC, CEA-Saclay), the analysis of further experiments performed on isolated filaments and the construction of a semi-quantitative mathematical model have allowed to show that only two basic ingredients are at the origin of the organized collective motion of millions of filaments forming the vortex lattice: the smooth, reptation-like motion of isolated microtubules and their physical collisions leading to nematic alignment.

This set of results constitutes a breakthrough in the field since it has allowed to show clearly on a real case that, what often remains a belief, albeit a well-grounded one, in theoretical statistical physics: a minimal set of simple mechanisms is sufficient to account quantitatively for complex emergent phenomena. Beyond this intellectual satisfaction, these results have also an important potential relevance in biology, in particular for understanding the formation of the plant cell cortex. More generally, they could be exploited in the quest for novel biomaterials. 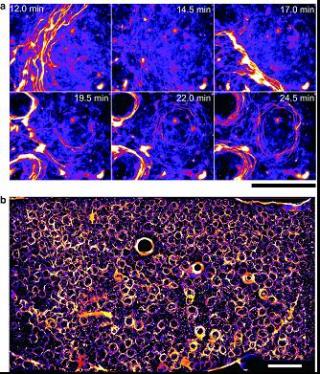 (a) Vortex formation. Scale: 500 um, equivalent to approximately 40 times the microtube length.
(b) Typical image of the system after 30 minutes. Scale: 2 mm.

Collective motion in the absence of leader or guiding external field, as in some bird flocks or fish schools, is one spectacular instance of emergent phenomena currently enjoying a lot of attention. Physicists, following the seminal work of Vicsek et al, have recently put forward a number of theoretical results which lack confrontation to data. In animal behavior studies, the topic now benefits from technologies allowing large-scale data collection. Yet, these data are still rare and arise from observations rather than controlled experiments. Multi-cellular biological systems, such as bacteria colonies or tissues allow for more control, but in all these cases, many “hidden” variables and interactions may be at play, hindering proper tests of theoretical ideas.

The sub-cellular level, on the other hand, can provide such a test, and in particular in vitro experiments with few purified components. Motility assays, in which protein filaments are driven by molecular motors grafted to a substrate in the presence of ATP, can display collective motion for high densities of motors and attached filaments. This was demonstrated recently for the acto-myosin system for which, however, a complete understanding of the mechanisms at work is still missing.

Here, we report on experiments where microtubules are propelled by surface-bound dyneins 1, a system which allows to elucidate the local interaction: with a high probability, microtubules collide, leading to (nematic) alignment. At high densities, they self-organize into large-scale vortices (diameter ~ 400 μm, whereas microtubules are 15 mm long) inside which they circulate clockwise and counterclockwise. On longer timescales, the vortices themselves formed a lattice structure. The emergence of these novel structures stems from the sole combination of the smooth, reptation-like motion of single microtubules and their collisions leading to nematic alignment, as testified by simulations of a mathematical model. Besides the potential relevance to cortical arrays in plant cells and other biological situations, our study provides evidence for the existence of heretofore unsuspected universality classes of collective motion phenomena.

[1] Dyneins: protein complexes of about 2 MDalton, comprising two heavy chains, seven or eight intermediate chains  and two light chains. The dyneins are active in association with a protein complex: the dynactin, motor protein in animal cells.