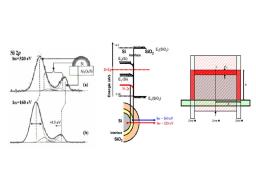 Si NCs were grown by LPCVD on 3 nm-thick Al2O3 layers deposited onto oxidized Si by Atomic Layer deposition.[5] The growth conditions for the Si NCs yielded surface coverage of around 30 % and an average diameter of 5 nm. Synchrotron radiation X-ray photoelectron spectroscopy (SRXPS) is used for the study of Si nano-crystals (NCs) for applications in non-volatile memory devices. The tunability of the photon energy allows selective characterization either of the oxidation shell or of the core of the NCs.

No exact analytical solution exists for hemispherical dots based on the approach of Himpsel et al.[6] We have used a rectangular profile as an approximation to the hemisphere, allowing an analytical integration over x and z, with a correction factor in order to extract the oxide shell thickness. [7]

We observe chemical shifts for the oxidized components that are consistent with those observed for planar oxidation. The FWHMs are much larger for the NCs than for a planar surface. This broadening is clear on the spectra for the Si4+ peak, and confirmed for every spectral component, including Si0; we observe for the NCs Si 2p components a Gaussian width which is 0.35-0.40 eV larger than for the planar oxidized Si.

Inhomogeneous stress in the NC volume upon oxidation gives structural disorder. [8] The core and the oxide shell present different stress state, and even in the shell itself the stress may depend on the thickness.