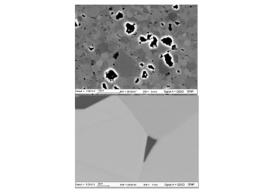 This research is carried within the framework of the 6th PCRD INCEMS project. [1] The objective is to predict the properties of multifunctional ceramics in the presence of Intergranular films (IGFs). Regrouping expert theoretical and experimental groups from Germany, UK, Slovenia and France, the CEA contributes the possibility of spectroscopic imaging on the mesoscopic scale, providing essential experimental verification of the extension of atomistic models to larger scales.

The electrical properties of electro-ceramics are largely governed by their complex microstructure and in particular by the grain boundaries, and must be precisely controlled for their applications (as, for instance, sensors, actuators and capacitors). A recent study has furnished first evidence for IGFs in SrTiO3.[2]

In this study, we have studied the dependence on niobium segregation in strontium titanate of various sintering parameters. 1.2 mol% Nb doped SrTiO3 was sintered at 1420°C in air for different times and with different post sintering cooling rates. Scanning electron microscopy images provided evidence of morphological differences among the prepared samples. We have established a surface preparation protocol from a combined XPS/AES/LEED study to obtain stoichiometric surfaces, important for reliable analysis of the electrical properties such as the work function. In particular we have proven that the often used oxygen plasma is not suitable.

An accurate X-ray photoemission study has shown that for 20 hours sintering in a reducing atmosphere there is the appearance of TiOx localized near the surface, either as a grain termination layer or in intergranular regions, as suggested by SEM. 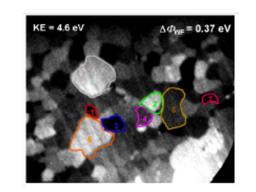