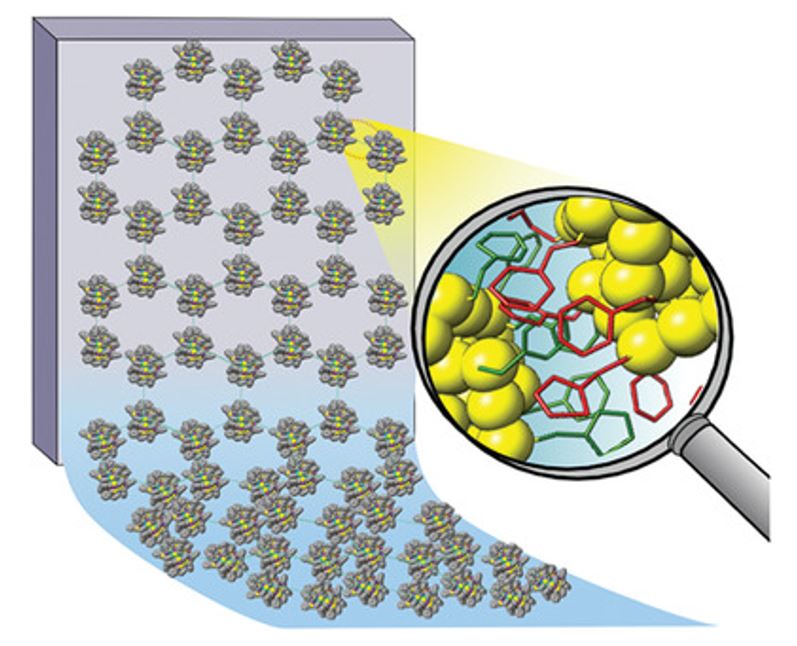 Nanoscale particles attract much attention due to their size-dependent optical, electrical and chemical properties. Of particular interest are ultrasmall metal nanoclusters which experience strong quantum confinement effect leading to profound changes in the atomic packing structure. The synthesis of these atomically precise metal clusters, typically with metal cores smaller than 2 nm in diameter, makes use of stabilizing functional molecules such as thiol ligands, hence deriving the common name – monolayer-protected clusters (MPCs). The next stage toward applications and at the same time a challenge in the field, is the manipulation and controlled organization of MPCs into two dimensional (2D) superlattices which would exhibit a collective response of the desired kind. Multiple examples of deposition techniques have been extensively studied, including droplet evaporation, spin-coating and chemical vapor deposition. However, a common drawback of all these methods is the failure to form large-scale structures of closely packed particles. Here, we study the formation and deposition of extended thin films of Au38(SC2H4Ph)24 nanoclusters onto solid supports by the Langmuir-Blodgett (LB) method. A combination of techniques, atomic force microscopy (AFM), high magnification transmission electron microscopy (TEM), X-ray reflectivity (XRR), and grazing incidence wide-angle X-ray scattering (GIWAXS) is applied to reveal the morphology and the degree of vertical and in-plane ordering of the transferred films. We find that while a degree of order is initially obtained between the clusters, temporal annealing of the compressed films successfully removes mesoscopic defects between islands of nanoclusters but that it does so at the cost of reducing the local order within the domains. To our knowledge, this is the first reported example of the deposition on an extended scale (several cm2) of ordered gold nanoclusters in the small size regime of 1 – 2 nm.