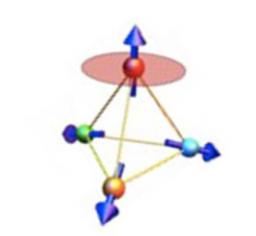 Spin ice is an unusual magnetic material in which the combination of strong local Ising anisotropy and ferromagnetic interactions imposes a local constraint to the magnetic moments, the "ice-rule" (see figure 1a). The magnetic state thus remains disordered but with specific local correlations. It belongs to the class of Coulomb phases, an original state of matter where the ground state is disordered, and the local constraint can be interpreted as the flux conservation law of electromagnetism.

Classical excitations in spin ice, called magnetic monopoles, are defects that locally violate the ice rule by reversing the orientation of a moment (see figure 1b), and thus induce a magnetic charge in the electromagnetic field. When the density of monopoles is large enough, an outstanding effect has been predicted by Brooks-Bartlett et al [1]: the emergent charged field can fractionalize into two parts, through the so-called "magnetic fragmentation" mechanism.

We have observed such "magnetic fragmentation" in a recently discovered material, the spin ice candidate Nd2Zr2O7, by means of neutron scattering measurements. This fragmentation (see figure 1c) manifests itself as a striking coexistence between an antiferromagnetic ordered state and a Coulomb phase with ferromagnetic like correlations. Experimentally, it manifests as the superposition of magnetic Bragg peaks, characteristic of the ordered phase, and a pinch point pattern, characteristic of the Coulomb phase (see figure 2). We further show that these two fragmented parts of the magnetic moment field behave independently.

Behind these observations, our experiments demonstrate that the electromagnetic field is “real” in these magnetic materials and highlight the relevance of quantum effects.  They open a new route in the study of frustrated magnets.

Figure 1: (a) The spin-ice “two-in two-out” configuration of the spins (arrows). (b) A spin flip (green arrow) creates 2 magnetic monopoles in the centre of the tetrahedra (read and blue dots). (c) The fragmented moments superimposed on the lattice. They are composed of “all-in all-out” (green arrows) moments from the crystallized monopoles and of the fluctuating (orange and purple arrows) spins from the (spin-liquid) Coulomb phase.  → → → 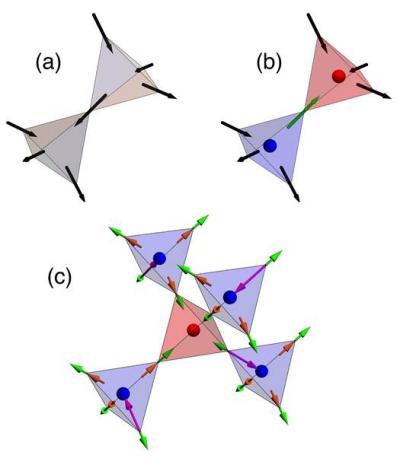 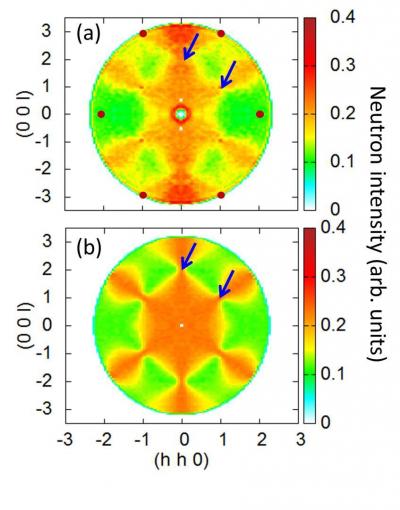 The work could only be achieved through a series of neutron scattering techniques: neutron diffraction on the D23-CEA-CRG diffractometer to observe the ordered fragment, polarized diffuse scattering and inelastic scattering on the D7 and IN5 spectrometers to observe the fluctuating part and the inelastic process. It is a collaboration between the LLB (CEA-CNRS-Univ. Paris-Saclay), CNRS Grenoble, Warwick University, CEA Grenoble and the ILL.