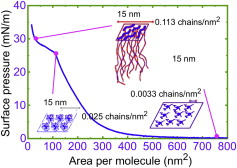 We introduce a copolymer with a comb topology that has been engineered to assemble in a brush configuration at an air-water interface. The molecule comprises a 6.1 kDa poly(methyl methacrylate) backbone with a statistical amount of poly[2-(dimethyl amino)ethyl methacrylate] polybase side chains averaging 2.43 per backbone. Brush layers deposited with the hydrophobic PMMA backbone adsorbed to hydrophobized silicon are stable in water even when stored at pH values less than 2.0 for over 24 h. The use of a Langmuir trough allows a simple controlled deposition of the layers at a variety of grafting densities. Depth profiling of brush layers was performed using neutron reflectometry and reveals a significant shifting of the responsiveness of the layer upon changing the grafting density. The degree of swelling of the layers at a pH value of 4 (below the pKb) decreases as grafting density increases. Lowering the pH of the subphase during deposition causes the side chains to become charged and more hydrophilic extending to a brush-like configuration while at neutral pH the side chains lie in a "pancake" conformation at the interface.