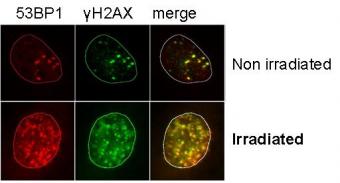 Ion microbeams constitute today a powerful tool allowing the study of local response to irradiation in living cells. We have developed at the laboratory a facility which is now in operation and that allows to study in situ cell responses induced by the microbeam. As a reminder, it is possible to deliver a controlled number of particles in selected cells.

Experimental conditions are close in our case to standard culture conditions (culture and irradiation are performed with cells in horizontal plane, culture boxes of Petri dish type, controlled temperature and atmosphere environment), thus limiting experimental bias to unreached levels with this type of studies. We have recently evidenced in both targeted and non targeted cells (bystander cells) double strand breaks by using the immunodetection technique of γH2AX and 53BP1 proteins, 2 hours after irradiation. These two proteins are involved in the DNA break repair process.