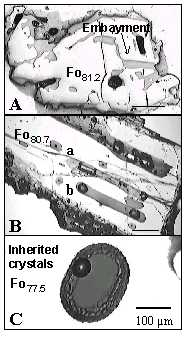 Since the early seventies enhanced eruptive activity of Mount Etna has been accompanied by selective geochemical changes in erupted lavas, among which a gradual increase of alkalis whose origin is still debated. Here we provide further insight into the origin of this recent evolution, based on a detailed study of the chemistry and dissolved volatile content of melt inclusions trapped in olivine crystals of unusual plagioclase-poor primitive basalt that was extruded during a highly explosive flank eruption in July-August 2001. Two types of lava were erupted simultaneously along a N-S fracture system. Trachybasalts from the upper vents (2950-2700 m) were simply drained out by fracturing of the central volcanic conduit. They are identical to summit crater lavas and contain Mg-poor olivines (Fo70-72) with evolved and volatile-poor melt inclusions that represent late-stage crystallisation during shallow open conduit degassing. In contrast, plagioclase-poor basalt (80% of total) extruded through the lower vents (2550-2100 m) derived from lateral dyke intrusion of a more primitive and volatile-rich magma across the sedimentary basement. This primitive melt is best preserved in rare Fo82.4-80.5 skeletal olivines present in lapilli deposits from the most powerful activities at the 2550 m vent. Its high dissolved contents of H2O (3.4 wt %), CO2 (0.11 to 0.41 wt %), S (0.32 wt%), Cl (0.16 wt%) and F (0.094 wt%) point to its closed system ascent from ~400 to 250 MPa (~12 to 6.5 km depth b.s.l.). However, the predominance of euhedral olivine phenocrysts with common reverse zoning (cores Fo76-78 and rims Fo78-80) and decrepited inclusions shows that most of the erupted basalt derived from a slightly more evolved, crystallizing body of the same magma that was invaded by the uprising primitive melt prior to erupting. The few preserved inclusions in these olivines indicate pre-eruptive storage of that magma body at about 5 km depth b.s.l., in coherence with seismic data. We propose that the 2001 flank eruption resulted from gradual overpressuring of Etna's shallow plumbing system due to the influx of volatile-rich primitive basalt that may have begun several months in advance. We find that this basalt is much richer in alkalis (2.0 wt% K2O) and has higher S/Cl (2.0) but lower Cl/K and Cl/F ratios than all pre-seventies Etnean lavas (1.4 wt% K2O, S/Cl =1.5), as further examplified by melt inclusions in entrained olivine xenocrysts. Combining these new observations with previously published data, we argue that the 2001 basalt represents a new alkali-rich basic end-member feeding Mt. Etna, only few amount of which had previously been extruded during a 1974 peripheral eruption and, more recently, during brief paroxysmal summit events. Over the last three decades this new magma has progressively mixed with and replaced the former K-poorer trachybasalts filling the plumbing system, leading to extrusion of gradually more primitive and alkali-richer lavas. Its geochemical singularities cannot result from shallow crustal contaminations. Instead, they suggest the involvement of an alkali-richer but Cl-poorer arc-type component during recent magma genesis beneath Etna. a.) Laboratoire Pierre Süe, CNRS-CEA, Saclay, France b.) Istituto Nazionale di Geofisica e Vulcanologia (INGV), Catania, Italy. Publication: Earth and Planetary Science Letters 2004, 228, 1-17
#511 - Last update : 08/03 2005
Tweeter