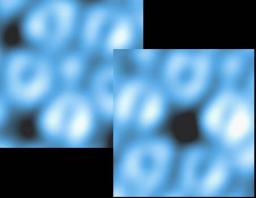 The discovery of quasicrystals in 1982 was a revolution in physics solid state. A crystal could have a 5-fold orientational symmetry prohibited by te usual crystallography. In return, its structure is aperiodic. One distinguishes quasicrystals with icosahedral symmetry (aperiodic in N=3 dimensions) and dodecagonal (N=2). The studies by x-rays and neutrons diffraction allows to describe their structure. To describe it, coordinates of atoms are numbers of the form (n+m τ, where τ is an irrational equal to the golden mean for icosaedral quasicristals). The aperiodic network can then be described in a (NxN) dimension space. Concerning surfaces of quasicrystals, neutral helium diffraction studies and scanning tunneling microscopy (STM) images of the 5-fold surface of i-AlPdMn give evidence of wide terraces separated by step heights higher than the minimal distances between atomic planes. The surface consists of aluminium rich planes. High resolution STM images of terrasses and step sequences can be interpreted by means of the NxN=6 dimensions Katz-Gratias polyhedral model. As for usual ordered alloy crystals (Cu3Au, Cu83Pd17...) terraces correspond to plans rich in segregating element (aluminium). However, the in plane density being not constant, it is necessary to add a selecting criterion on the density of the topmost and second planes.
#496 - Last update : 08/22 2005
Tweeter