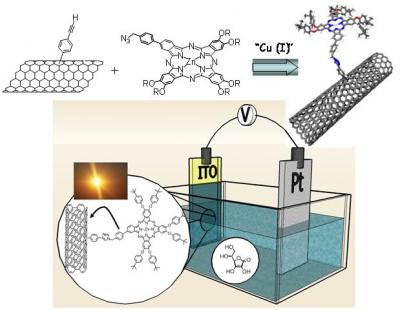 However, fabrication of nanotube-based molecular assemblies is still limited because of the difficulty to incorporate highly engineered molecules on the nanotube surfaces. The emerging field of “click chemistry” can bring very elegant solution to achieve easily nanotube-based functional materials. In 2001, Sharpless introduced this new concept in organic chemistry. The term “click chemistry” defines a chemical reaction which is versatile, clean with simple workup and purification procedures. Among the large collection of organic reactions, Huisgen cycloaddition represents actually the most effective reaction of the click chemistry. This reaction consists to 1,3-dipolar cycloaddition between azide and acetylene derivatives in the presence of Cu(I) catalyst.

Recently, we reported an example of SWNTs functionalized with Zn-phthalocyanine via “click chemistry”. We demonstrated that the SWNT-ZnPc conjugate could be used for the realization of optoelectronic devices (i.e. photovoltaic cells). We are currently working to extend this concept to the linkage of other functional molecules to nanotubes.

Due to their remarkably high electrical conductivity, carbon nanotubes (CNT) can be used for the implementation of the power leads or lines and vias in the microcircuit. However, a prerequisite for the realization of complex CNT-wiring is the ability to form junctions between nanotubes in controllable way. At present, the electrical properties of such junctions between the CNTs are not well known. I

n collaboration (PNANO Nanoréseaux 3D -project, financed by ANR) with LPICM group in Ecole Polytechnique, we fabricate individual CNT-junctions using a regrowth (bifurcation) technique. Multi-walled carbon nanotubes (MWNT) (see black arrows in the figure above) are first functionalised with ferritin, which is a protein containing a 5nm iron cluster. After deposition of functionalised MWNTs the substrate and calcination of the protein, the iron nanoparticles covering these primary MWNTs are used as catalysts for the growth of secondary MWNTs (see blue arrow in the figure above). Both primary and secondary nanotubes are afterwards reconnected in order to evaluate the electrical properties of obtained nanotube junction. 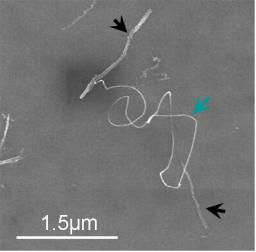 The coupling of aryl diazonium ion 1 involves a radical intermediate 2 which binds on carbon nanotube 3. The absorption peak of the nanotube is consequently quenched. Spectra at the center of the figure (as a function of wavelength, from blue to red as a function of time) are recorded as a follow up of the reaction. The metallic nanotube (m-NT) peak appears to drop 3 times faster than the semiconducting nanotube (sc-NT) peak. At the same time, a growing ESR peak due to stable nanotube radical species can be observed.

We are developing a chemical process to suppress metallic nanotube conductivity while preserving semi-conducting nanotubes, so that the mixture can be used directly as a semi-conducting material after reaction. Because no separation step is involved, the process provides a very low cost material, compatible with printed electronics and plastic solar cells applications.

The process is based on a deep study of the reaction of diazo compounds with carbon nanotubes. Our detailed study of its mechanism allowed to understand the origin of and enhance the chemical selectivity of the reaction. Using kinetic recordings (see center spectra on the figure) and electron spin resonance (ESR), we demonstrated a radical mechanism in the diazonium/nanotube reaction.

Turning to diazoester/nanotube reaction allowed for a strong improvement in selectivity. The semi-conducting nanotube material produced by our process is now tested in printed transistors and organic solar cells.