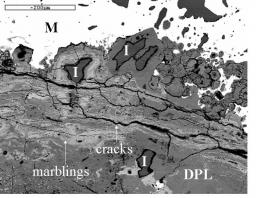 During the past few years, the number of studies concerning the corrosion of archaeological ferrous artefacts has increased significantly. Indeed, in France, this increase is linked to more general studies dealing with the designing of nuclear waste management systems. In this context, the use of reinforced concrete is envisaged for different applications, like low level radioactive waste containers, and more generally nuclear infrastructures containing iron/concrete interfaces. The Atomic French Agency and other French Institution developed a specific research program in this field : the CIMETAL (Ciment Métal) project. In the frame of CIMETAL, the study of this kind of archaeological analogues is necessary to improve knowledge on the long-term corrosion behaviour of low carbon steels that could be used in concrete to build the substructure of nuclear wastes storage or reversible disposal facilities. The corrosion system can be described as a multi-layer pattern made of metal, a dense corrosion product layer, a transformed medium and a binder. The morphological and physicochemical properties like composition, structure and porosities of each part were studied with different analytical methods like optical and electronical microscopies, Energy Dispersive Spectrometry coupled with Scanning Electron Microscopy, Electron Probe Micro Analysis, Mercury porosimetry, micro Raman spectroscopy and micro diffraction under synchrotron radiation. Moreover, average corrosion rates were evaluated. These rates are relatively low compared to the same parameters measured on low alloyed contemporary steels and are comparable with corrosion rates noted for passivated systems. In all the studied samples, the same phases were found in the DPL: mainly goethite containing magnetite and/or maghemite marblings. Other oxi-hydroxides can also be noticed on some samples (lepidocrocite and akaganeite). Moreover, it was shown that several elements (calcium, chlorine, iron, etc) could migrate in the Binder, the Transformed Medium or the Dense Product Layer. Thus, mass transport properties will have to be studied in the future. For instance, Rusts macroscopic dimensions could allow experimentation in diffusion cells in order to evaluate more precisely oxygen apparent diffusion coefficient. * CEA/DEN/LECBA