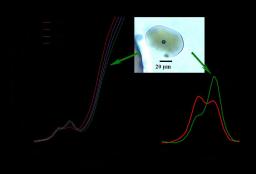 ΣΞIron and sulfur may be considered as the couple of elements buffering the redox state of magmas during their ascent from Earth’s mantle to the surface. However, the in-situ determination of both the redox state of magmas and the relative variation of the [Fe3+/(Fe3++Fe2+)] atomic ratio is challenging because these silicate melts crystallised in response to the temperature decrease, the decompression and the release of most of their volatile constituents (H2O, CO2, H2S, SO2, HCl) prior to eruption. Previous micro-X-ray absorption spectroscopy (µXANES) experiments performed on ID21 (ESRF) on Fe-bearing silicate reference glasses, at room temperature, indicated that the energy resolution allows an accurate discrimination between the pre-edge features of Fe2+ (7111.5 eV) and Fe3+ (7113.2 eV) and that the area ratios between the Fe3+ and Fe2+ peaks correlate with the Fe3+/ΣFe ratio determined independently by classical chemical analyses. However, the effects of the cooling rate and of the glass transition may induce bias in the determination of the redox state of Fe in glasses, because of rapid electron exchange. This problem may be addressed by direct in-situ measurements of the chemical environment of Fe as a function of temperature. We provide, here, the first in-situ µXANES experiments at the iron K-edge (7130 eV), carried out on ID21 beamline for determining the chemical environment of iron in natural silicate glass/melt, between 20 and 800°C. These experiments were performed on H2O-rich silicate glass inclusions trapped within natural hermetic containers as pure SiO2 quartz crystals. These inclusions are droplets of magma trapped at high temperature (i.e. 750°C) in growing crystals and preserved as glass in volcanic samples, because of rapid cooling. The prepared as double face polished, 150 µm thick lamella in order to preserve the inclusion in the centre of the crystals and thus isolated from the surroundings. The samples were placed in a water-cooled furnace. Different series of µXANES spectra (2x2 µm2) probe were collected on melt/glass inclusions, by decreasing the temperature by step of 100°C, from 800 to 20°C. The pre-edge features significantly and progressively evolved towards reduce state (Fe2+) at high temperature up to 797°C. and towards the oxidised (Fe3+) pole when cooling down to 20°C (Fig). It demonstrates the dominance of Fe3+ in the pre-edge structure, a shift of the centroid position by nearly 0.5 eV and an increase in the energy of the main edge at 20°C compared to high temperature. This results in an apparent and drastic change of the oxidation state of iron, as the temperature decreases. The slower the cooling rate the higher the ferric iron contribution. The [Fe3+/ΣFe] ratio of samples may be overestimated by a factor 1.7 to >2, implying that this ratio cannot be reliably retrieved by probing natural cooled glass inclusions and most likely silicate glasses. Iterative µXANES experiments coupled with in-situ infrared spectroscopy measurements performed on the same samples show that the process is reversible. The possible mechanisms at the origin of apparent oxidation of iron upon cooling are thus discussed. High temperature µXANES experiments led first to an assessment of the ferric-ferrous ratio in the water-rich peralkaline melt in pre-eruptive magmatic conditions and second to the determination of the corresponding oxygen fugacity at 740°C. Publication Chemical Geology (2005 in course of revision) * European Synchrotron Radiation Facility, Grenoble, France ** Laboratoire de Geosciences, Université de Marne La Vallée, France + INSTN, CEA, CE-Saclay, , Gif sur Yvette, France
#359 - Last update : 07/27 2005
Tweeter