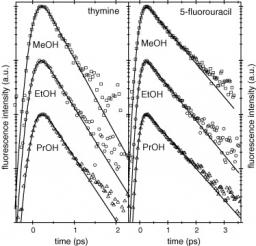 Fluorescence decays of thymine and 5-fluorouracil in methanol, ethanol and 1-propanol recorded at 330 nm after excitation at 267 nm. Solid lines correspond to fits with mono-exponential functions.

The excited state lifetimes of uracil, thymine and 5-fluorouracil have been measured using femtosecond UV fluorescence upconversion in various protic and aprotic polar solvents. The fastest decays are observed in acetonitrile and the slowest in aqueous solution while those observed in alcohols are intermediate. No direct correlation with macroscopic solvent parameters such as polarity or viscosity is found, but hydrogen bonding is one key factor affecting the fluorescence decay. It is proposed that the solvent modulates the relative energy of two close-lying electronically excited states, the bright ππ* and the dark nπ* states. This relative energy gap controls the non-radiative relaxation of the ππ* state through a conical intersection close to the Franck–Condon region competing with the ultrafast internal conversion to the ground state. In addition, an inverse isotope effect is observed in D2O where the decays are faster than in H2O.