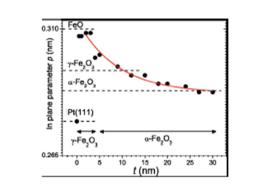 Antiferromagnetic oxides, with high Néel temperatures, like NiO and Fe2O3 are of particular interest for many devices of technological relevance such as catalysis and high-density magnetic data storage technologies using giant magnetoresistance effects (GMR). Moreover their high corrosion resistance let expect very stable devices that may work even in harsh environments.

The direct inclusion of oxide films in complex structures like spin valves requires a good knowledge of the growth conditions and interface reactivity. In order to reach a complete description of oxide layers laboratory tools (RHEED, AES, XPS…) as well as complementary synchrotron radiation techniques were used (surface X-ray diffraction, small angle X-ray diffusion, X-ray absorption and dichroism, photoelectron microscopy…). Various elaborations methods were tested for the growth of NiO on Cu(111). Ultra-thin NiO films, obtained through evaporation of a Ni rod under an oxygen atmosphere at 550 K led to oxide films showing 10–30 nm large, monolayer high, islands with a partial incorporation of metallic Ni in the first Cu(111) surface plane. A NiO cluster nucleation and coalescence mechanism describes well the early stages of growth before a non-stoichiometric layer with complex diffraction patterns is formed. [1] The direct evaporation of NiO on Cu(111) shows a specific hole formation attributed to an oxygen promoted diffusion of Cu on the Cu(111) surface combined with Ni diffusion. [2] The incorporation of Ni in the substrate in the early stages of growth leads to a well-defined almost monodispersed assembly of holes (48 Å in diameter). The Ni-rich corrals along the hole edges act as a template for the subsequent growth of islands. [3]

The growth of Fe2O3 by atomic oxygen plasma molecular beam epitaxy has been investigated in detail [4] for thicknesses up to 30 nm. The use of Pt(111) single crystalline substrates enabled the use of most of the electron based surface science techniques and thus clear phase identifications. Along with a progressive lattice mesh relaxation, the layers undergo a complete structural transformation from γ-Fe2O3 to α-Fe2O3 at 3 nm showing that the apparent surface lattice parameter is not linked to the actual crystalline structure of the layer (Fig. 1). Hematite is a canted antiferromagnetic oxide with a high Néel temperature TN(α-Fe2O3)=950 K, that may be used in exchange-biased devices and sensors through the well-known pinning of the magnetization of a ferromagnetic layer in near contact. To the contrary, γ-Fe2O3 has pronounced ferrimagnetic behaviour and may find important applications in nanocomposites exploiting the superparamagnetic properties of small particles.