Schematic of the nuclear microprobe

The nuclear microprobe is a non-destructive analysis tool allowing elemental characterization at the micrometer scale of solid samples of diverse origins: interfaces and grains of synthesized materials, cellular monolayers, inclusions in terrestrial and extraterrestrial geologic samples…

The method relies on the detection and spectrometry of emitted radiations by the interaction of a light ion micro-beam with the atoms composing the major elements or traces of the samples.

At Laboratoire d'Etude des Eléments Légers (LEEL), this beam is produced by a Van de Graaff type particle accelerator (A) with a maximum voltage of 3.75 MV. Different particles can be produced: 1H+, 2H+, 3He+, 4He+. The beam is then guided to one of the two available analysis channels (B), then shaped and focused on the sample to be analyzed (C).

The beam can be scanned on the sample, and it is thus possible to construct elementary images and maps using spectra collected by the different detectors surrounding the sample.

1 / Electronic; in case of ionization in a deep layer, the ion created emits a characteristic X-ray. The technique resulting from this phenomenon is called PIXE (Proton Induced X-ray Emission). It is particularly sensitive to heavy elements (from Z = 16).

2 / Nuclear; if the nucleus-nucleus collision is elastic, the incident particle is scattered, and the technique is thus called RBS (Rutherford BackScattering). The energy of this particle is a function of the diffusing nucleus and the depth where the interaction took place.

The Elastic recoil detection analysis (ERDA) technique consists in detecting by transmission or grazing incidence the recoil nucleus (light) of the target, ejected after irradiation by a heavier ion such as helium. This technique is the only one that allows precise hydrogen quantitative analysis in materials without requiring the use of standards.

In case of an inelastic collision, the interaction is a nuclear reaction, which leads to the NRA technique (Nuclear Reaction Analysis). This type of interaction emits nucleus fragments in the form of charged particles and γ-rays. These two techniques are better suited for light Z, sometimes with isotopic sensitivity, allowing the use of isotopic tracers.

Another characteristic of this technique is the resolution in depth (in the case of nuclear interactions). It is thus possible to implement 3D microscopy (tomography) techniques for certain light elements. 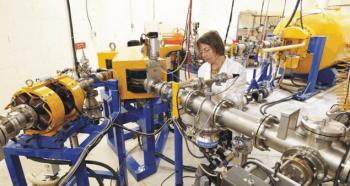