Demonstrated by Ashkin in 1986, the optical twizzers has now become a common technique for the manipulation of micro-objects. The extension of this technique to the case of nano-objects opens up many opportunities in the field of nanoscience and nanotechnology.
This challenge involves the implementation of light intensity gradients much stronger than those which are usually obtained by focussing a laser beam to its diffraction limit. This project studies the feasibility of optical nanorails leveraging field gradients either from local field enhancements from the excitement of plasmonic nanostructures, or from nanoscale confinement of light arising from the coupling with dielectric waveguides. Beyond the definition and implementation of such NANORAILs trapping, the final objective of the project is to identify the best approach as well as the ultimate size of objects that can be trapped. 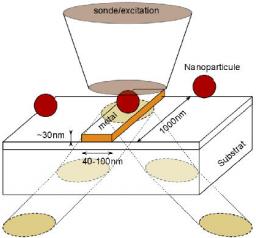