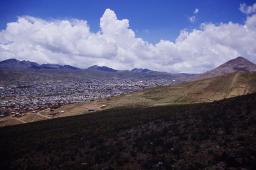 The Cerro Rico Moutain and Potosi

The official history about the silver mine's of Potosi (Bolivia) begins with the discovery of their fabulous ore deposit by the Indian Diego Huallpa in 1543, and with the donation that himself made to Spanish conquerors. This offering justified all the colonial exploitation of this site. Numerous historical studies evidence the social and macro-economic consequences of the site opening. Nevertheless, the history of the metallurgical procedures practiced in Potosi still remains to make. Throughout the treaty of Father Alfonzo Barba "Art of the metals" published in 1640, the development of several techniques of treatment of silver mineral from the Potosi mountain are described. This treaty constituted an index for a long time, dealing with particular emphasises of the amalgamation procedures to the detriment of environmental consequences. Moreover Barba described the indigenous furnaces used in the first times of the exploitation of this mountain. In fact, since the opening of these mines, the conquerors request the "guairadores", Indians specialized in metallurgy and related techniques, because European metallurgists did not know the treatment of this kind of minerals in such environment. Until now, none archaeological testimony of the indigenous furnaces associated to the Potosí's mine was discovered. Recent researches brought archaeological evidences of these structures in the proximity of the Potosi mountain to ligth, similar to indigenous models described in historical texts. Valuable information could be obtained from a comparison between Potosi mines and the mining site of Porco, where the exploitation remained under Inka's control. Beyond typological study, analyses of slags allows understanding the metallurgy of silver in course in pre-hispanic Andes when these two civilizations came into contact. * Université Paris I
#322 - Màj : 25/03/2005
Tweeter