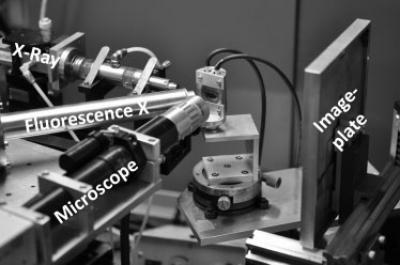 XRD setup for in-situ measurment on a rotating anode generator

Three wrought iron ingots immersed during 2000 years at 12 m deep in Mediterranean Sea were stored after excavation for 2 years without specific protection in air. After that period, two of them were treated by immersion in a NaOH solution, while the third was used to describe the corrosion system resulting from the storage conditions. This characterisation was achieved by a combination of microanalytical techniques. It could be concluded that though ferrous hydroxychloride β-Fe2(OH)3Cl was the main Cl containing phase at the time of excavation, akaganeite [β-FeO1-x(OH)1+xClx] was the only one present in the rust layers after storage. In order to determine the influence of corrosion products nature on dechlorination treatment, the evolution of a corrosion system composed of both Cl containing phases β-FeOOH and β-Fe2(OH)3Cl has been followed during in situ NaOH experimental treatment. Specific behaviours of each phase to the dechlorination treatment have been revealed.