COME-ON
Optical Control of the Motion and Organization of Nanoparticles

The possibility of using light to control the movement of individual nano-objects through the use of molecules with photomechanical properties, such as azobenzene derivatives, is currently an active research topic. Indeed, the Trans-cis isomerization of such molecules is now well known to give rise to the phenomena of light-induced material transport in a polymer medium, the magnitude of which can be considerable. However, such effects have never been utilized to launch the motion of nano-objects and spatially control it.
The main objective of this project is to study the molecular parameters required for optically inducing the motion of nanoparticles (NPs) and ultimately controling the direction of this movement toward the realization of preset patterns of assemblies.

The project has been concluded with the organization of a workshop on Optical Manipulation of Nano-Objects : OMNO 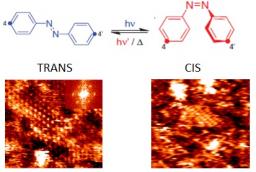 STM images (9*9nm²) of a monolayer of azo-substituted alkane-thiols on a Gold (111) surface in the Trans and Cis states.