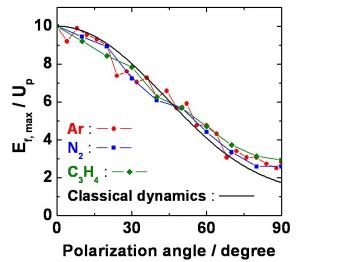 The project proposes to develop a new gas-phase electron diffraction technique using state-of-the-art femtosecond laser technology and the related attosecond physics. In principle, the method allows to analyze structures of transient molecular species with a resolution approaching a few femtoseconds. Nowadays the spectacular progress in laser physics has opened the way to a full control of optical tunnel ionization of atoms and molecules in the attosecond time domain using carrier-envelope-phase-locked few-cycle pulses. Since its proposal in the 1990s by Kuchiev, Schafer and Kulander, and Corkum, the so-called rescattering model has been successful in explaining many new highly non-linear effects such as non sequential double ionization and XUV attosecond pulse generation in terms of quasi-classical orbits of the ionized electron which is driven back onto the ion core by the laser electric field. Following these advances, we propose to control the attosecond dynamics of the first ionization step and the electronic rescattering paths in aligned molecules using carrier-envelope-phase-locked few-cycle laser pulses. The main objective will be to process time-resolved electronic diffraction patterns of molecules using well-established unimolecular experimental diagnostics such as ion and electron spectroscopy. In this scheme, the linearly-polarized laser field drives the corresponding electron flux back onto the ion core. The associated De Broglie wavelength is of the order of internuclear distances thus opening the way to interference effects and structural analysis. Rescattering following tunnel ionization may be elastic or inelastic depending on the energy exchange with the remaining ion core. Our main interest will be focused on elastic rescattering which is the operating physical effect for photoelectron diffraction.