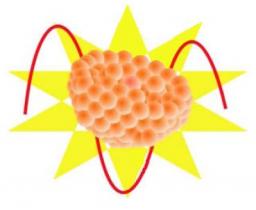 Clusters consists in a set of several up to million atoms in condensed phase with nanometric finite size. The investigation of their properties as the function of their increasing size is sometimes presented as one way to build a macroscopic condensed world from a gas. This often appears to be too simplistic, because the static and dynamic behavior of clusters has often no equivalence at the macroscopic scale, as they are controlled by their high specific surface and their finite size. These concerns the physical chemistry of the mesoscopic world, as illustrated by the recent experimental study driven by the "Reaction dynamics" group of DRECAM/SPAM-Laboratoire Francis Perrin in collaboration with a theoretician team from Paris VI University.

A femtosecond laser pulse, of intermediate intensity (≈ 1013 W cm-2), focused on a cluster consisting of several hundred argon atoms (ArN where N is the number of atoms of the cluster) can lead to its explosion. In one original reaction path, which has just been identified, the coulombian explosion of the cluster results from the initial formation of two very close positive ions inducing the formation of two asymmetric ionic clusters: a small one with 1 to 4 atoms and a larger one including several dozen of atoms. The speed distribution of the fragments shows that the explosion mechanism of the two charges requires an initial excitation during the laser interaction within an highly excited ionic state which relaxation induces the ionization of one neighbor atom. Both charges so formed repelled together forming, with surrounding atoms, the two emitted ionic clusters. This result is a priori very surprising because the observed phenomenon imposes a high localization of the initial energy. The observed dissociation does not correspond to that of a solid or a liquid where a statistical distribution of excess energy leading to a gradual evaporation of the cluster would be observed, but a brutal fission. 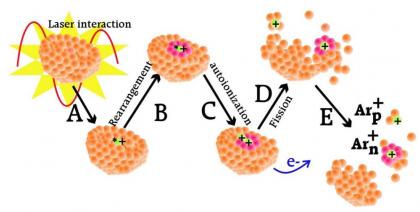 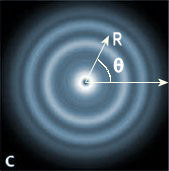 Figure : Speed distribution of Ar15+ ions emitted from an aggregate of approximately 750 atoms after irradiation by a femtosecond laser. R is proportional to the velocity of the ions emitted in the direction θ with respect to the direction of the polarization of the laser light. The color intensity scale is linear and proportional to the number of ions. The rings of this figure shows that the Ar15+ ions are isotropically emitted. The three rings indicate three clearly distinct classes of speed, according to the mass and energy of the recoil fragment formed (Ar+ to Ar3+). The central spot corresponds to the simple ionization of the cluster.