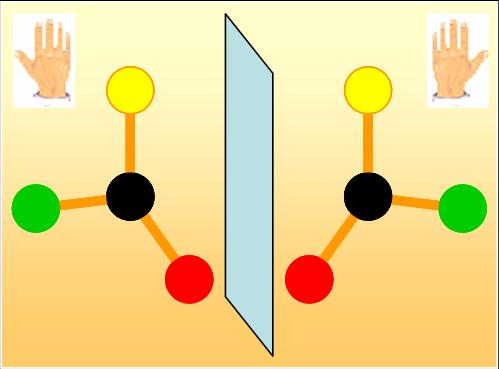 One of the great mysteries of life is its lack of symmetry at the molecular scale. Many biological molecules, like amino acids, exist a priori in two asymmetrical forms, "right” and “left”. Such molecules are referred to as “chiral” . Like the two hands, these forms cannot be superimposed but are mirror images of each other (Fig.). However, in living organisms, proteins are exclusively built up from “left” amino acids. This selection of only one form remains one of the great scientific enigmas, which physicists, chemists and biologists try to solve.

Proteins are extremely long chains of amino acids. Each amino acid is added by formation of a peptide bound (CONH) and release of a water molecule, leaving a residue attached to the chain. Within the cells, the proteins thus formed are folded and their function depends not only on their sequence but also on their conformation. This makes the studies of the fundamental mechanisms of protein folding of strong interest.
By studying both experimentally and theoretically the folding of simple peptides, made of two amino acids, researchers from the "Service des Photons, Atomes et Molécules” of CEA-Saclay have obtained new results documenting the issue of chirality of the living world.

The simple succession of amino acids (or residues) constitutes the primary structure of a protein. The number of folding possibilities is very large. However, each protein folds according to a pre-established order by its sequence, with successive levels of organization, starting with the secondary structures. A reliable model of protein structure will therefore require an accurate description of the interactions involved in the folding process into secondary structures.

One experimental and one theoretical team have gathered their forces to study one of the keys of the folding mechanism: the various types of β-turns, basic secondary structures allowing a reversal of the peptide chain. These teams have studied simple model peptides, made of 2 amino acids, and terminated by specific caps (Ac and NH2) mimicking the rest of the chain. The interest of the theory-experiment joint study stems from the possibility to identify unambiguously the structures observed from their infrared spectrum.

The experimental approach developed in the team “Excited bio-molecules” consists in vaporizing peptides at high temperature in a state denatured (i.e disordered) by laser desorption. Molecules are then cooled in a supersonic expansion, by collisions with the He carrier gas. Upon cooling, peptides fold and are then analyzed by laser optical spectroscopy. 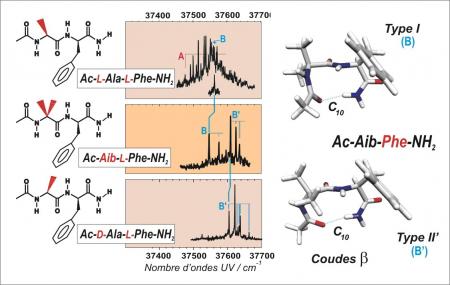 The approach developed by the “Theoretical Chemistry” team combines several methods of quantum chemistry, namely the method of the density functional theory as well as perturbational methods, which allow accounting for electronic correlations. The goal is to identify the most stable equilibrium structures of these systems, to accurately calculate their relative energies (and then their abundance), and finally to simulate their infrared spectrum, allowing the assignment of the observed structures.

These approaches make it possible to document the role of residue chirality (L or D, for  left- or right-handed) on the β-turn folding of a small peptide chain. First, the system Ac-Aib-L-Phe-NH2 with a non-chiral first residue (Aib = acid amino-isobutyric) is found to fold according to two types of β-turns: β(B) and β(B') (see figure). Then, the choice of a specific chirality (L or D) for the first residue leads to a unique folding form: either β(B) for the homochiral combination (-L-Ala-L-Phe-) or β(B') for the heterochiral combination (-D-Ala-L-Phe-).
The UV and IR spectra (see figure) also show that the competition of the β-turns with less folded, extended forms strongly depends on the chirality. Whereas the hetero-chiral combination (D-L) leads exclusively to a β(B’) turn, the formation of a β(B) turn is challenged by other less folded forms (form A). Thus, the peptide chains (of homochiral type L) have the required flexibility for the multiple structural adjustments to complete the folding and in fine the functionality of protein.

Thus, homochirality of the chains could be a trick of nature to impose folding features of less variability, while providing a greater flexibility to the molecular backbone, necessary to the biological functionality of the protein. On the contrary, heterochirality can be made profitable in pharmaceutical applications to rigidify drug structures.