A method to observe the complete vibrational spectrum of ionized molecules

In the method, called SPES (Slow Photo-Electron Spectroscopy), the molecules are excited to an autoionizing state (Rydberg state) by a photon in the VUV (vacuum UV) range, and the non-zero energy electron with its associated ions are measured in coincidence after ionisation. The coincidence measurement allows selecting only the electrons from the ionization of Ar2. The non-zero energy of the electrons implies that the process of auto-ionization is associated with some vibrational relaxation, giving access to all the lower vibrational levels of the ionized molecule (Figure 1).

The performance of this method have been highlighted by the study of argon dimers using the spectrometer coincidence imaging electron / ion installed on the beamline DESIRS of the synchrotron SOLEIL [1]. Atomic argon having all its electronic layers completed, Ar2 dimer can be stabilized only by van der Waals bonding, and its ground state has therefore a large interatomic distance. However, its Rydberg states and ion can lead to the formation of (metastable) excimer molecule or stable ionized molecule. So that the ground state and the ionized state are very different. 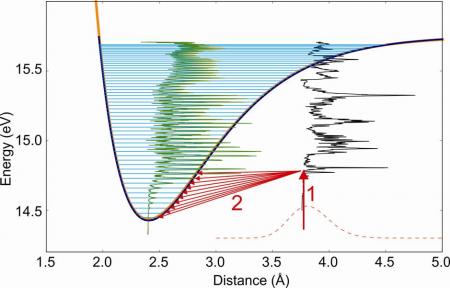 With the measure of the energy of each electron detected in coincidence with an ion, the method SPES (Slow-Photo Electron Spectroscopy, blue curve) can be observed throughout the vibrational spectrum of the ion Ar2+.
In comparison to conventional treatment TPEPICO spectroscopy (Threshold photoelectron photoion coincidence, green curve), where only the very low-energy electrons are measured spectrum shows a much poorer, especially where the vibrational levels of the lowest in the ion can be achieved.

By applying the SPES method to this dimer, the lowest vibrational states of Ar2+ (see Fig.2) have been directly observed for the first time, while they are a priori unattainable according to the Franck-Condon principle (for which transitions are most effective between states whose vibrational wave functions show a strong spatial overlap). The potential energy curve of the Ar2+ ion, further obtained by reconstruction (RKR method, Rydberg-Klein-Rees), is in good agreement with that obtained by the best methods of current ab initio calculations. However, the small differences observed in vibrational spectroscopy, encourage further theoretical investigations. In addition, we also obtained the ionization probability for all vibrational levels accessible from each intermediate excited state.

The SPES method so validated on the model case of the Ar2 molecule is generic and can be applied to other systems, such as polyatomic molecules of atmospheric interest or biological, where electronic redistribution induced by ionization can lead to strong structural rearrangements.