Thanks to phase coherence of electrons in nanoscale conductors, many concepts of quantum optics can be transposed to mesoscopic physics. The Landauer-Büttiker formalism that describes electronic transport through quantum conductors with the wave scattering approach of quantum optics, best illustrates the analogy.  In return, quantum components such as Josephson junctions or quantum dots form artificial atoms which have allowed original quantum optics experiments.

However, the connection between quantum electrical transport and quantum optics goes beyond these analogies. Indeed, quantum electric transport naturally couples to electromagnetic radiation: A dc biased quantum conductor gives rise to current fluctuations due to the granularity of charge carriers and the probabilistic character of quantum transport. Such current fluctuations may excite the surrounding electromagnetic modes, giving rise to a rich regime of light-matter coupling. I will show that this light-matter coupling strongly modifies the response of the quantum conductor, and can produce non classical radiation. 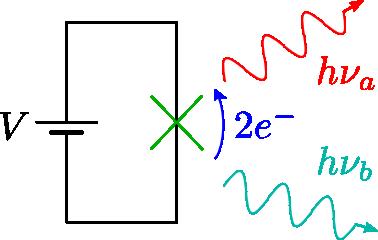